Guest Post: this post was written by Alison, a 6th year student from Wallace High who spent some time in the museum in January 2016 on work experience.

The original castle of Sir Fulke Conway began construction in 1622 and was in the style of a manor house. During the 1660s and 1670s further work was carried out and this was when the surviving part, the east wall was built. The castle was destroyed in the town fire of 1707 and was never rebuilt with its gardens later being turned into a public park.

Across from Castle Gardens there was a large Georgian House called the ‘Marquis House’ and this is were Sir Richard Wallace decided to build Castle House. It was demolished so the new house could be set further back from the street line which meant the neighboring houses could be used as a frame to bring more attention to the center house. The construction of  Castle House began in 1880. It was designed by Thomas Benjamin Amber and built by John MacHenry, who also built Lisburn Court House. 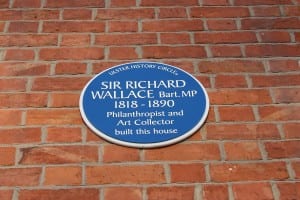 Sir Richard Wallace was born Richard Jackson on the 21st June 1818 in London, his parents were unknown. In 1825 he moved to Paris and lived with the Countess of Yarmouth, who later became the Marchioness of Hertford. He remained with her in Paris until her death in 1856. In April 1842 he changed his name to Richard Wallace. His last visit to Lisburn was in 1880, seven years after the first. In 1884 he resigned from his parliamentary seat and became a recluse until his death in 1890 in Paris. After his death the people of Lisburn raised a modest version of the Albert Memorial in Castle Gardens in memory of Sir Richard.

Castle House remained unused until 1914 when it was bought by Lisburn Urban District Council for £2000, it had been originally built for £20,000. It was turned into a Municipal Technical Institute which opened on the 13th November 1914. The first principal was Cecil Webb who served as principal until 1941. 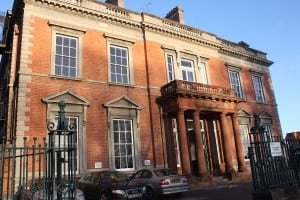 In 1962 the eastern framing block of the house on Castle Street was replaced by a different building line. Over time the back park has been covered by Wallace Avenue and the back garden is now beneath a collection of buildings.