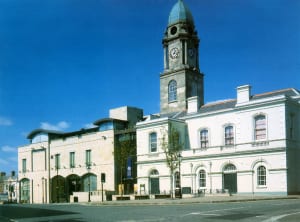 The Museum and its collections are housed in the old Market House, an late seventeenth-century building, since heavily modified. The town’s merchants sold their wares and produce and sought shelter in and around the ground floor of the building, and John Wesley preached here in 1756 and 1789. The first floor Assembly Rooms played an important role in the social and political life of Lisburn, hosting regular soirees, balls, dance classes and political meetings throughout the eighteenth and nineteenth century.

The surrounding Market Place was first laid out in Sir Fulke Conway’s plan of the town in the 1620s, and was the later site of the city’s bustling linen market. Here weavers sold vast quantities of brown, unbleached, linen. William of Orange, on his way to the Boyne, ‘took refreshments’ in Market Place in 1690, while United Irishman swung from gallows erected here following the unsuccessful rebellion of 1798. At an entry just off nearby Castle Street, James Wallace installed Ireland’s first steam engine, from Watt’s factory in Glasgow, in 1790. 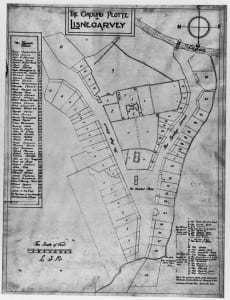 From the museum it is only a short walk to Castle Gardens. Although the original castle is no longer standing, part of the walls and the impressive seventeenth-century terrace, including the gazebo and bakery, remain. The Gardens contain a monument to Sir Richard Wallace, local MP, landowner and successor to the Conway’s, whose collection of art and that of his father’s, the 4th Marquess of Hertford, largely makes up the Wallace Collection. 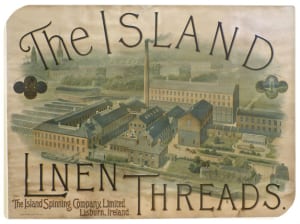 Castle Gardens affords a panoramic view of much of Lisburn  and the wider Lagan Valley, and it is possible to pick out remnants of the region’s industrial past. Just east of the Gardens, for example, lies the former site of the Vitriol chemical works (c.1760-c.1840) and later the Island Spinning Company Ltd (1867-1983), responsible for flax spinning and thread making.  The island, bounded by the River Lagan in the north and the canal in the south, is now occupied by Lisburn City Council, but the lock, through which over 180, 000 tons of linen, coal and dry goods travelled every year, remains.

Nearby, also, is the site of the iconic Coulson’s factory. From 1766 up until the 1960s the company, housed in a distinctive thatched building, produced fine damask linen, which was exported internationally. Coulson’s received Royal patronage in 1811, and a gold medal for their linen napkins and tablecloths at the Great Exhibition, Crystal Palace (1851). 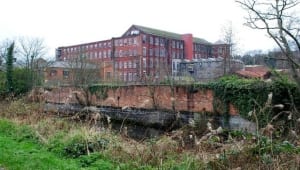 South east of Castle Gardens, and just over a mile east of the Island, is the site of the Hilden mill complex, at one stage the world’s largest linen thread mill.  Owned and operated by the Barbour family, in some form, from 1842 to the 1960s, the complex is a patchwork of workshops for spinning and the production of linen thread. The Barbour family, in the tradition of many nineteenth-century industrialists, built a model village, consisting of housing, a school and a community hall, to support their workforce.  Although abandoned, the mill is still standing, and provides a glimpse back into the Lagan Valley’s industrial past. A short distance away is Glenmore bleach green. In constant use from the eighteenth century, the green was used to treat – through the use of sulphuric acid, and an extended drying period in the sun – the brown, untreated, linen. In 1887 the site at Glenmore, under the ownership of Richardson, Sons & Owden turned out over 300,000 linen webs. 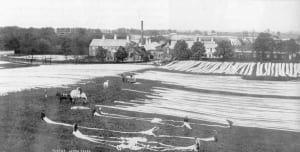 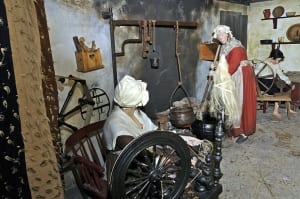 A thorough overview of the Barbour family, a sample of  Coulson’s damask linen, or indeed the broader history of the linen industry in the Lagan Valley, is provided at the ILC & LM’s permanent ‘Flax to Fabric’ exhibition. Visitors are guided through the history of linen and its manufacturer, from its use in Egyptian burial rites, its biblical significance – fine linen is mentioned in Genesis – right through to its cultivation in Europe in the Middle Ages. The Irish linen industry developed under various political and technological pressures, and the influence of English landlords, Dutch spinning techniques, Quaker labour and Huguenot self-promotion, is outlined in the exhibition. A recreated 18th-century cottage scene gives visitors a sense of the lives of workers in Ulster’s domestic linen industry before industrialisation. The entire family was involved in the process. Women spun the flax into yarn – visitors can try this for themselves – while children wound it onto bobbins. Weaving was left to the men, and usually took place in a separate part of the cottage. The ILC & LM have a workshop dedicated to weaving, with a full-time staff operating a series of looms, including two Jacquard looms. Jacquard’s design was revolutionary, significantly speeding up the weaving process, and his innovative use of punched cards to control individual threads of the warp allowed complex damask patterns to be wove. His invention was an important influence on Charles Babbage, and the Jacquard system is viewed as a ‘first-step’ towards the development of the modern computer. Demonstrations are given daily. 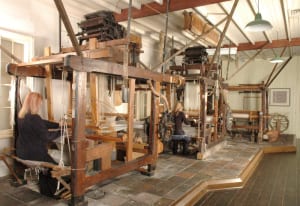 Jacquard Looms in the weaving workshop. Note the mechanism for reading the punched card on top.
© Copyright ILC&LM.

The linen industry played an important role in the geographical, social and industrial heritage of Ulster, and this is explored through presentations of The Wee Blue Blossom, a 1930’s film examining the traditional harvesting and spinning of flax, and The Irish Interlude (1955), a nostalgic look at industrial-life in post-War Belfast. Irish linen was sold worldwide, and the Museum houses a collection of some of the finest samples, including a piece of intricate damask woven at Coulson’s to commemorate Queen Victoria and Albert’s 1849 visit to Belfast, as well as fine embroidered muslin from the prestigious Belfast retailers Robinson & Cleaver. The work of Sybil Connolly, once Ireland’s leading clothes designer, is also celebrated in a display that shows off a number of her linen creations. Her work was worn by the likes of Jackie Kennedy, Queen Elizabeth and Liz Taylor. 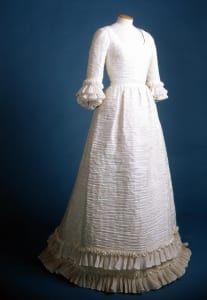 The Market House gallery hosts regular displays and exhibitions on local history, from the Titanic to ‘17th-century Lisburn’, or even highlights from the Museum’s collections in the ‘Curator’s Choice’. The ILC & LM has a dedicated library and research service, and its education officers run a range of free workshops for school groups, colleges and community organisations.