War!  The Outbreak of War and its Causes

In the aftermath of the Great War (1914-1918) Germany signed the Treaty of Versailles. Although designed to bring lasting peace to Europe, the crippling cost of reparations and the loss of territorial claims irked many Germans. On top of this, a global economic downturn in the 1920s and 1930s made life very hard. Within this context Adolf Hitler, a former Austrian WWI veteran, and leader of the National Socialist German Workers Party, or Nazi Party, came to power. In 1933 he became Chancellor of Germany, quickly banning political opposition, building up the military and rolling back the Treaty of Versailles. Other world powers did little to stop Hitler, aiming for appeasement over confrontation.

In September 1939 the Germans invaded Poland. Britain and France, allied to Poland, were forced to intervene and reluctantly declared war. Two decades after WWI in which over 40 million people died, Europe was once again at war.

Nazi ideology discriminated against Jews, non-Aryans, disabled people and gay men, among others. This discrimination was given legal footing in Germany through the Nuremberg Laws. In 1933 the Nazis established a concentration camp at Dachau, southern Germany, initially to hold political prisoners but Jews were increasingly sent there.

Walter Storch, who was born in Vienna in 1907 to Jewish parents, was interned by the Nazis in Dachau and Buchenwald concentration camps in 1938, but managed to make his way to Ireland in 1939. He spent the war in the Isle of Man, but eventually settled in Lisburn and ran a chiropody practice on Bow Street, Lisburn. The Museum’s permanent collection holds his Nazi-stamped passport. 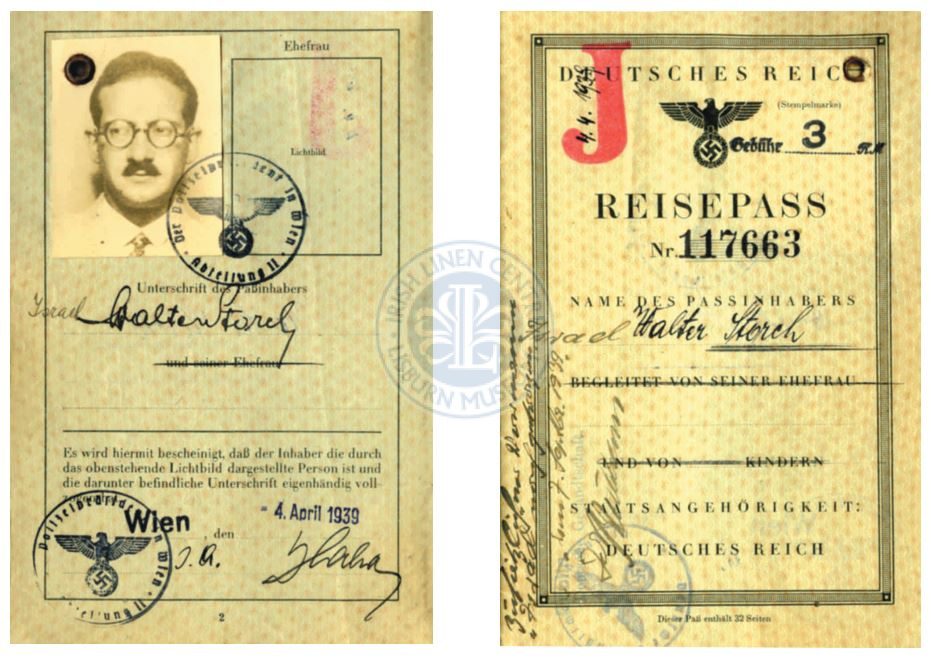 German Passport of Walter Storch, 1907-83, born in Vienna
of Jewish parentage who made a new life in Lisburn.