At War! Northern Ireland and the Front 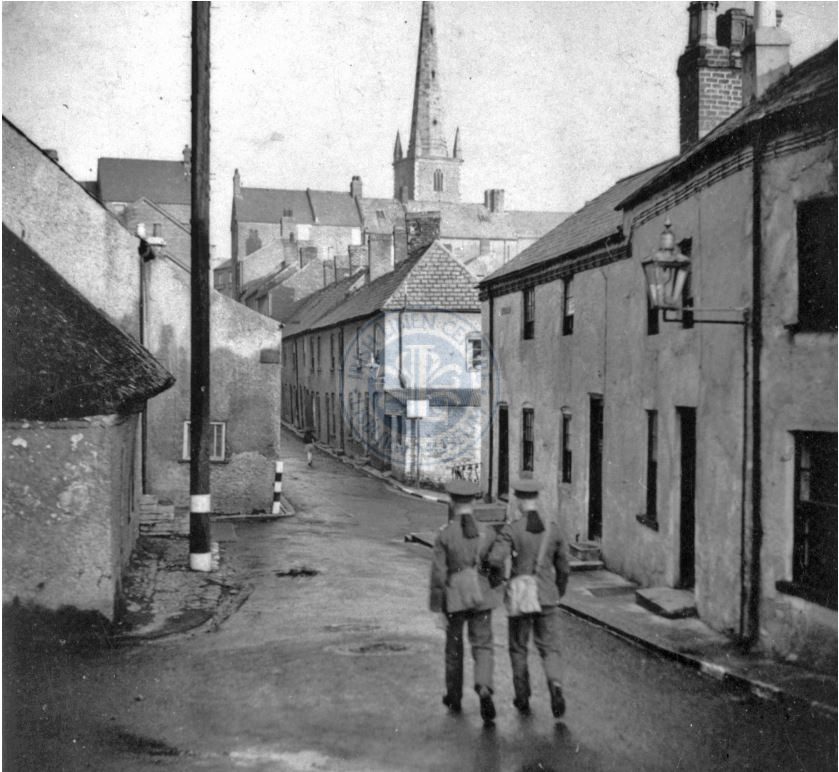 During the early days of the war the 4th Battalion Royal Welsh Fusiliers were stationed in Lisburn for training.  This iconic photograph captures two recruits walking past the famous Coulson Damask factory (thatched, left) on Piper’s Hill, 1939.

When WWII broke out the British Government rushed to boost the ranks of the armed forces, which was dwarfed by the size of the German Army. One initiative involved the introduction of conscription through the National Service (Armed Forces) Act in 1939. It did not apply in Northern Ireland. The Great War cast a long shadow, and conscription had been a controversial topic in Ireland in 1918. By the end of the war, and across the various services, over 38,000 individuals, men and women, would enlist for service.  Many more would stay at home and service industry. 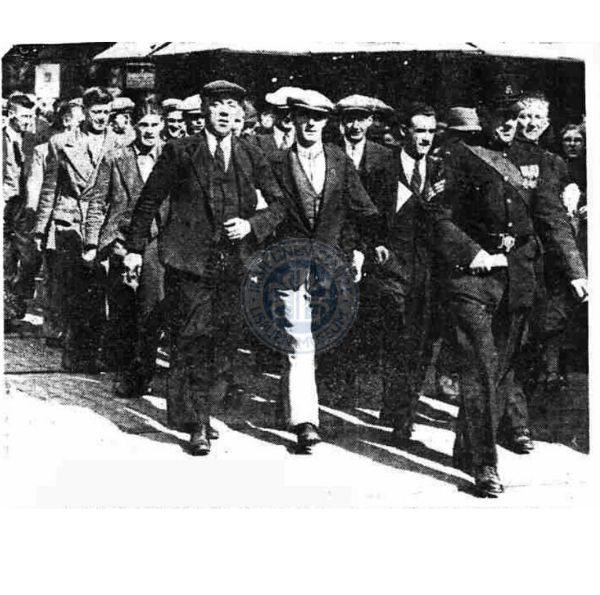 An everyday scene in Lisburn, recruits marching off to the train station, 1939. (ILC&LM Collection)

Northern Ireland’s location on the edge of Europe meant it played an important strategic role in the air and sea war. A number of airfields were established in the wider Lisburn area, including RAF Aldergrove, RAF Nutt’s Corner, RAF Maghaberry and RAF Long Kesh. 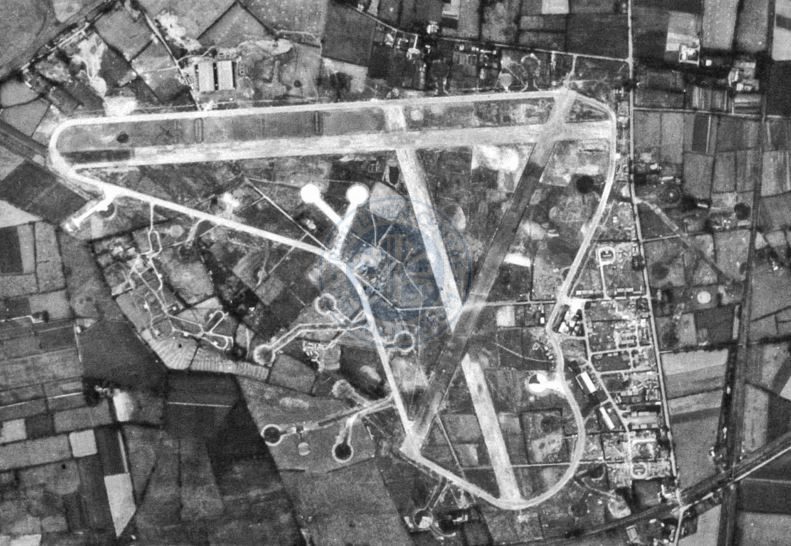 Official aerial photograph of Long Kesh airfield, 28 July 1942.  Halftown Road is to the right of the airfield.  (ILC&LM Collection)

Americans and the War

Langford Lodge, near Crumlin, was a grand Georgian stately home formerly owned by the Pakenham Family. The USAAF, or American Airforce, used the base to service their fleet and had two runways. The Lockheed Corporation was contracted to build aircraft, including, bombers here and the Lodge was used as an Officers’ club. The RAF and USAAF even had a flying-boat base at Sandy Bay, Lough Neagh.

Prior to D-Day 120,000 G.I.s were stationed in Northern Ireland for training. 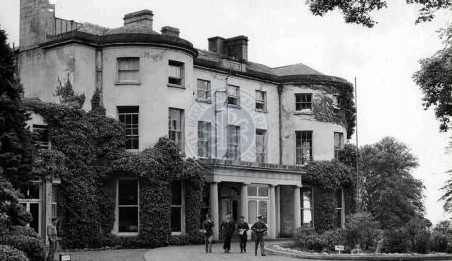 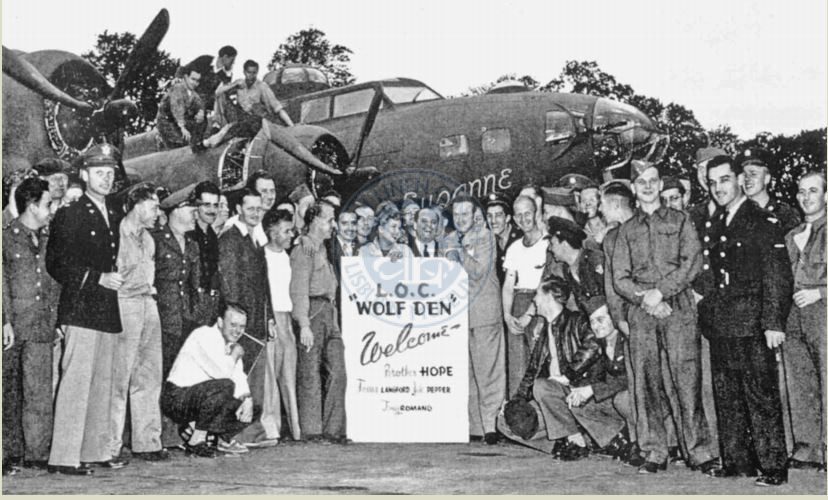 As WartimeNI note, Langford Lodge was very well serviced. It had a hospital and dentist, laundry, church, cinema and even a jazz band. The American comedian Bob Hope, pictured above, was only one of several celebrities to visit the base. Major Glenn Miller, well-known WWII band leader, even played Langford Lodge.  Hear a clip of Miller leading his band at a base in England below.

The amenities on offer at the base were in sharp contrast to the austere life most people were living in Northern Ireland.

Polish and the War

A number of Polish airmen were stationed in Northern Ireland during the war and flew for the RAF. They were based at Ballyhalbert, Co. Down. A memorial to one polish pilot, FL/Sgt Stanislaw Grondowski who crashed during a training flight in August 1943, can be found on the Plantation Road, Lisburn. 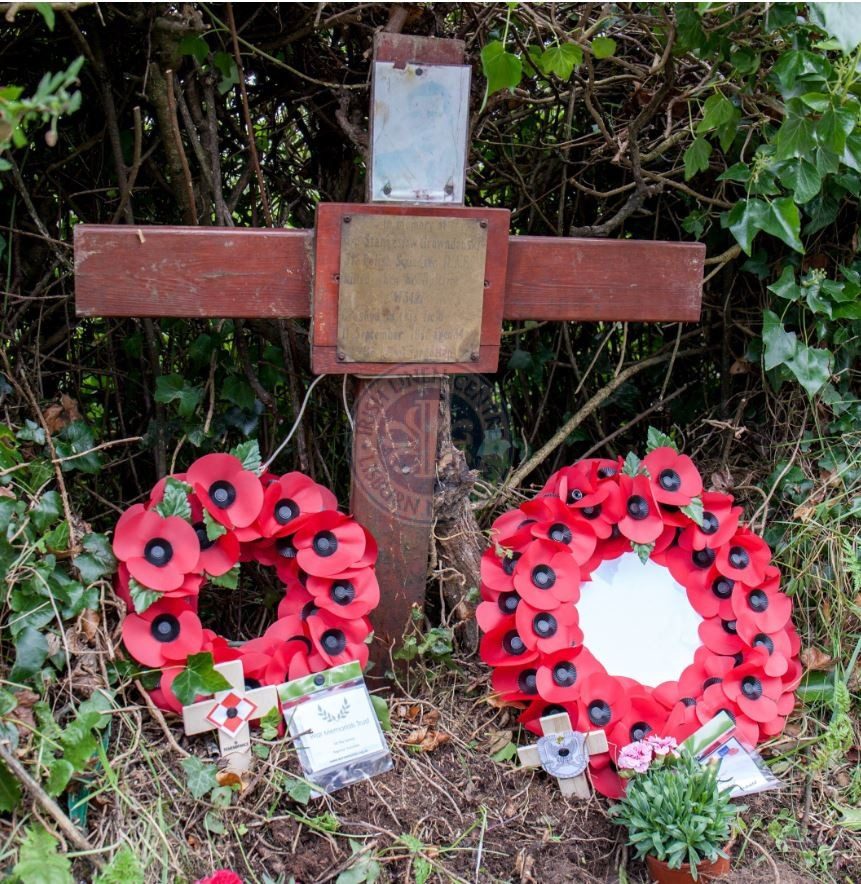 “Bale out!” Alfie Martin and the Caterpillar Club 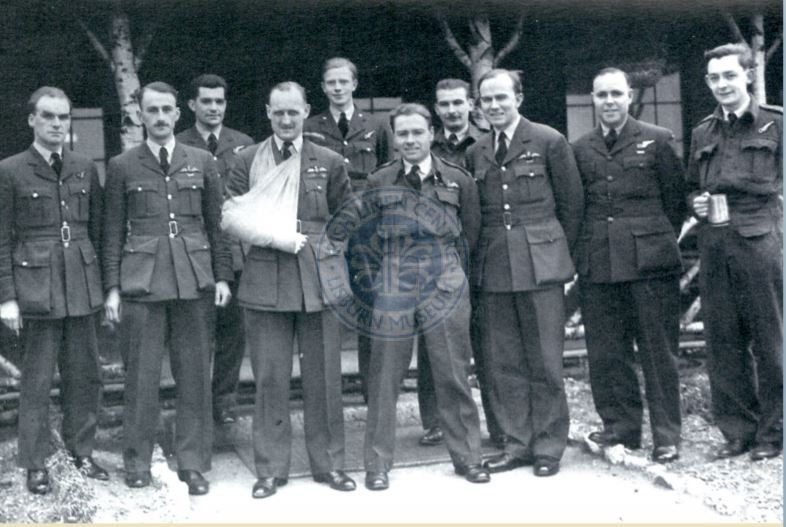 Alfie Martin (above, 1943 with 102 Squadron), a former student at Friends’ School, Lisburn, flew on Halifax Bombers for the RAF during the war and was shot down in 1943 over Belgium. He evaded capture for a number of weeks, and eventually made it home to Northern Ireland. He was awarded a gold caterpillar pin for successfully ‘bailing out’ of a downed aircraft and landing by parachute. 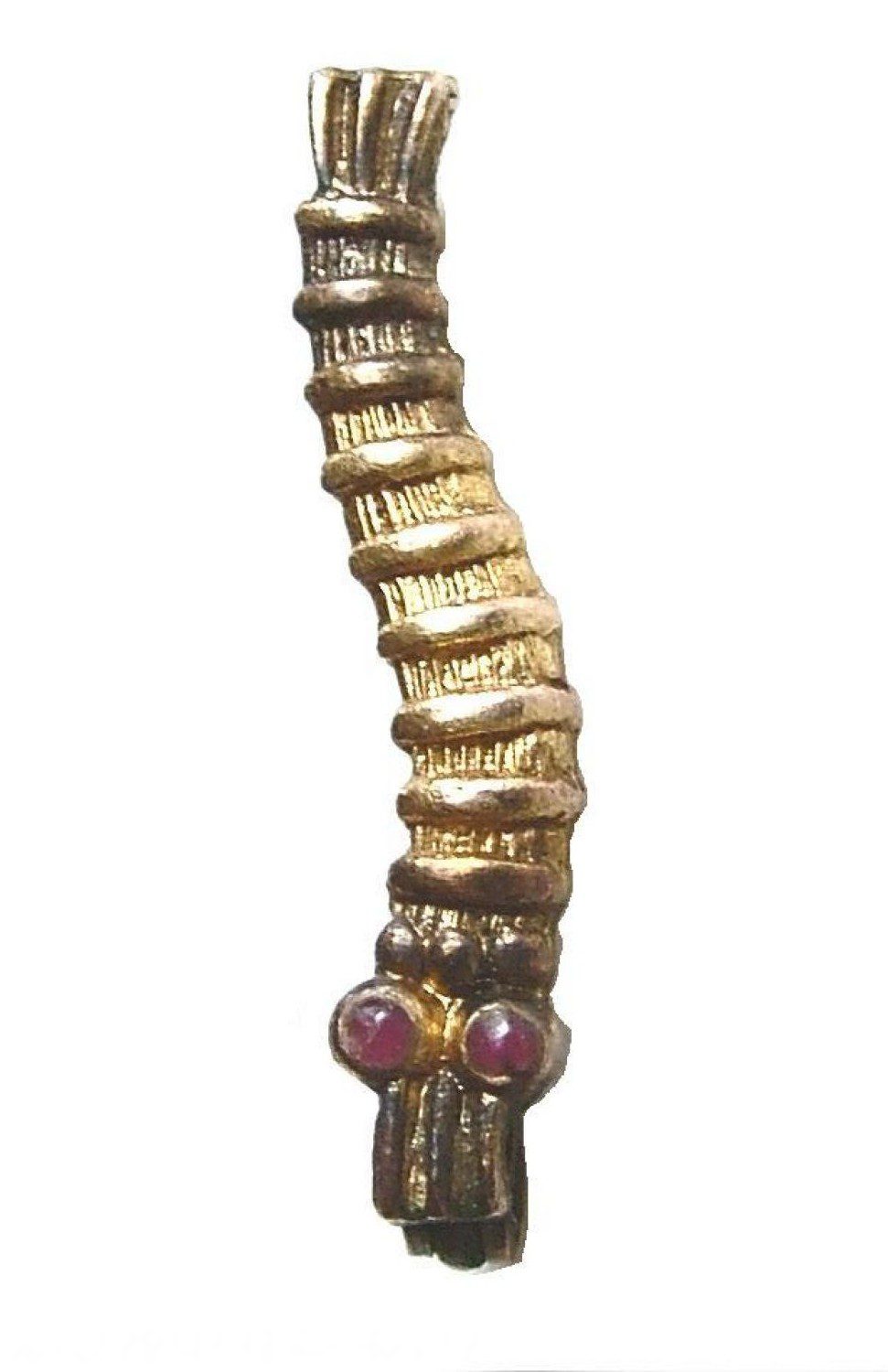 Caterpillar Club, Lapel Pin
The Caterpillar Club pin was presented to individuals who had ‘baled out’ successfully wearing an Irvin parachute made by the Irvin Air Chute Company.  Alfie Martin’s badge is held in the Museum’s permanent collection.
ILC&LM Collection 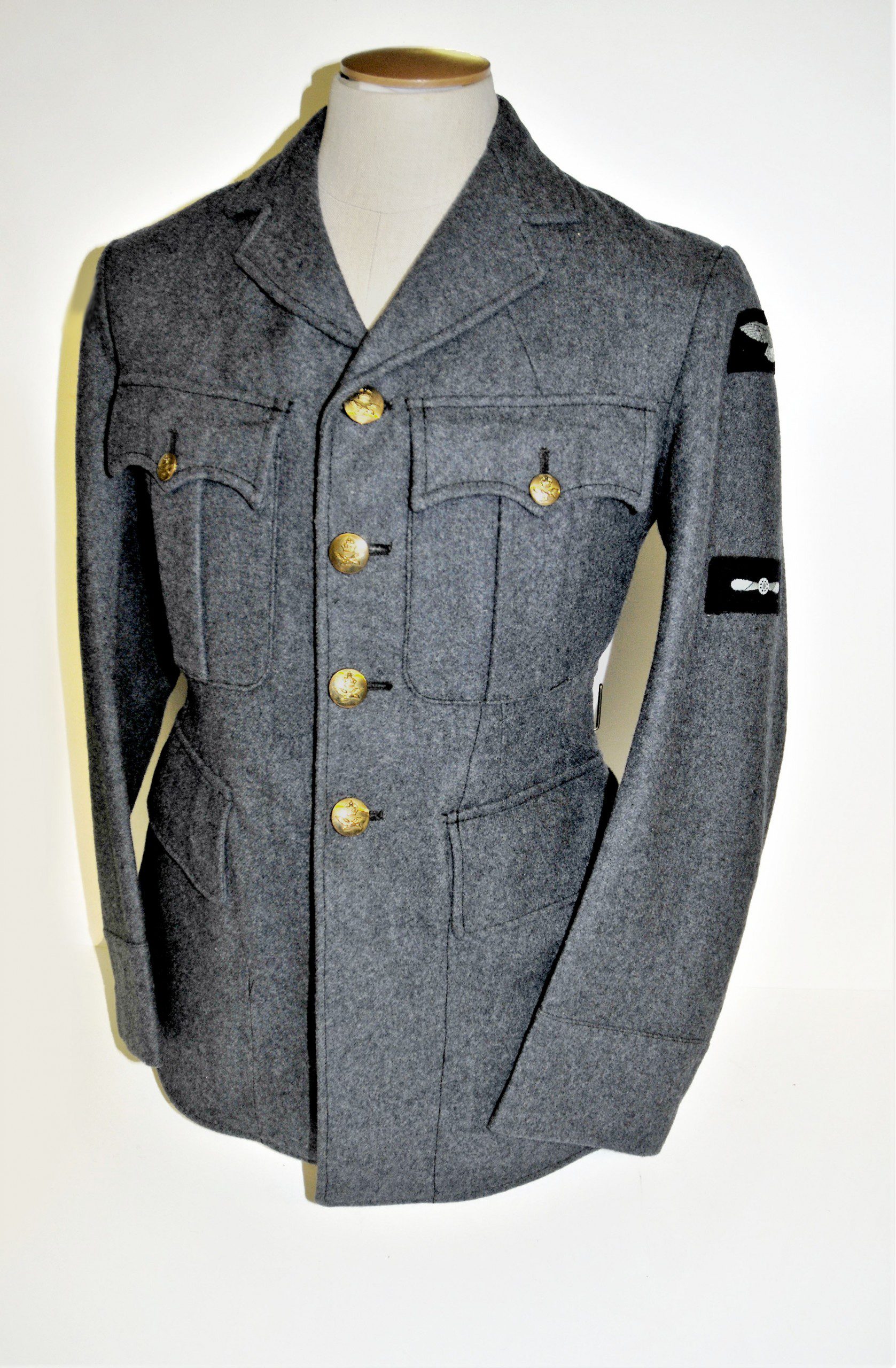