With the United Kingdom at war everyone had to deal with restrictions as everyday items became harder to come by. Food rationing was introduced in 1940 and ration books based on a points system were introduced for the purchase of certain items, such as meat, eggs, bacon or sugar. In Northern Ireland the border with Eire (Ireland) was a huge advantage as it allowed shoppers to take day trips and purchase illicit supplies. Customs officers often searched those returning home. War-time clothing was also rationed, and the era developed its own unique war-time style. 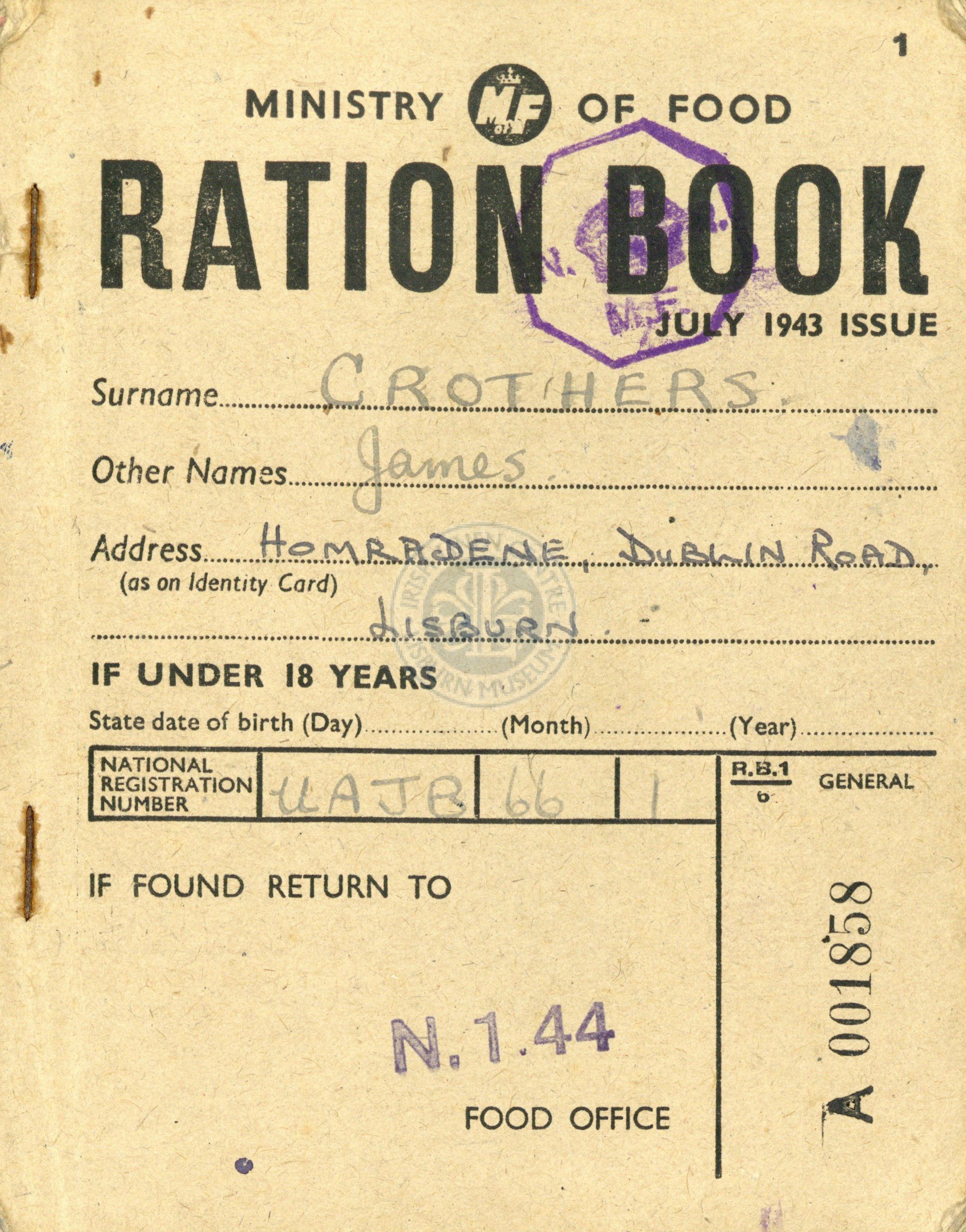 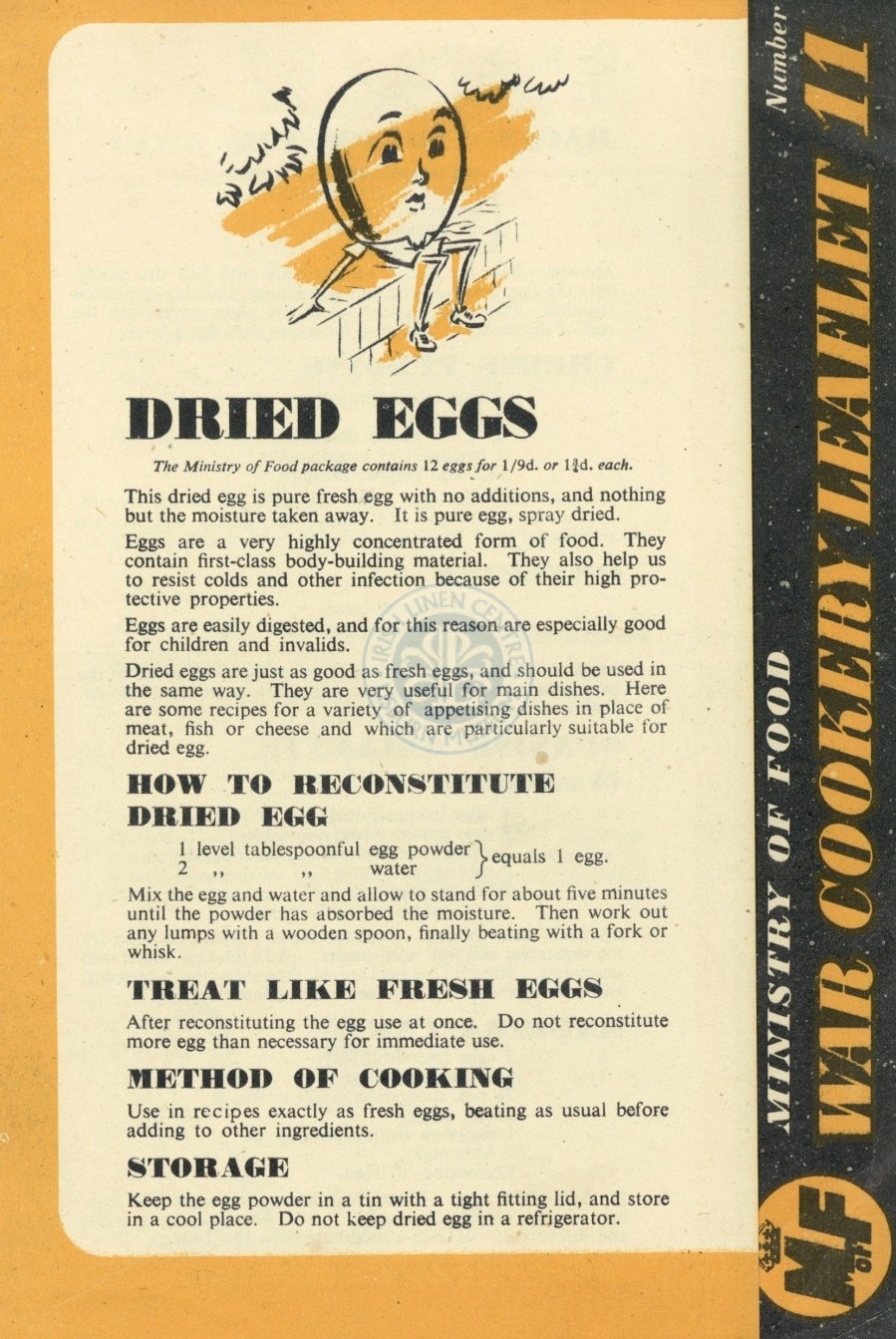 The War saw a huge increase in food production across Northern Ireland, and land under tillage increased from 150,000 acres to over 850,000 acres.  The Government’s ‘Dig for Victory’ campaign encouraged every patch of ground to be cultivated, and the initiative saw Queen’s University, golf clubs, Stormont Estate and even Wallace Park, Lisburn, turned over in part to agriculture. 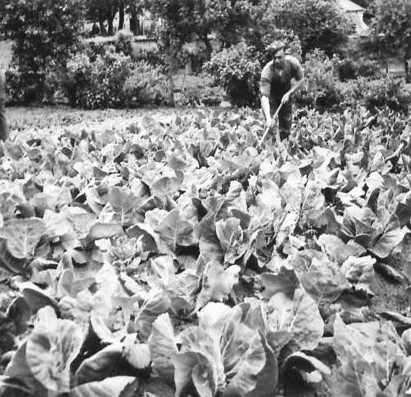 Digging for Victory
One of the voluntary soldier-gardeners attending to some of the cabbage plants at Thiepval Barracks, 1942.
Copyright: © IWM 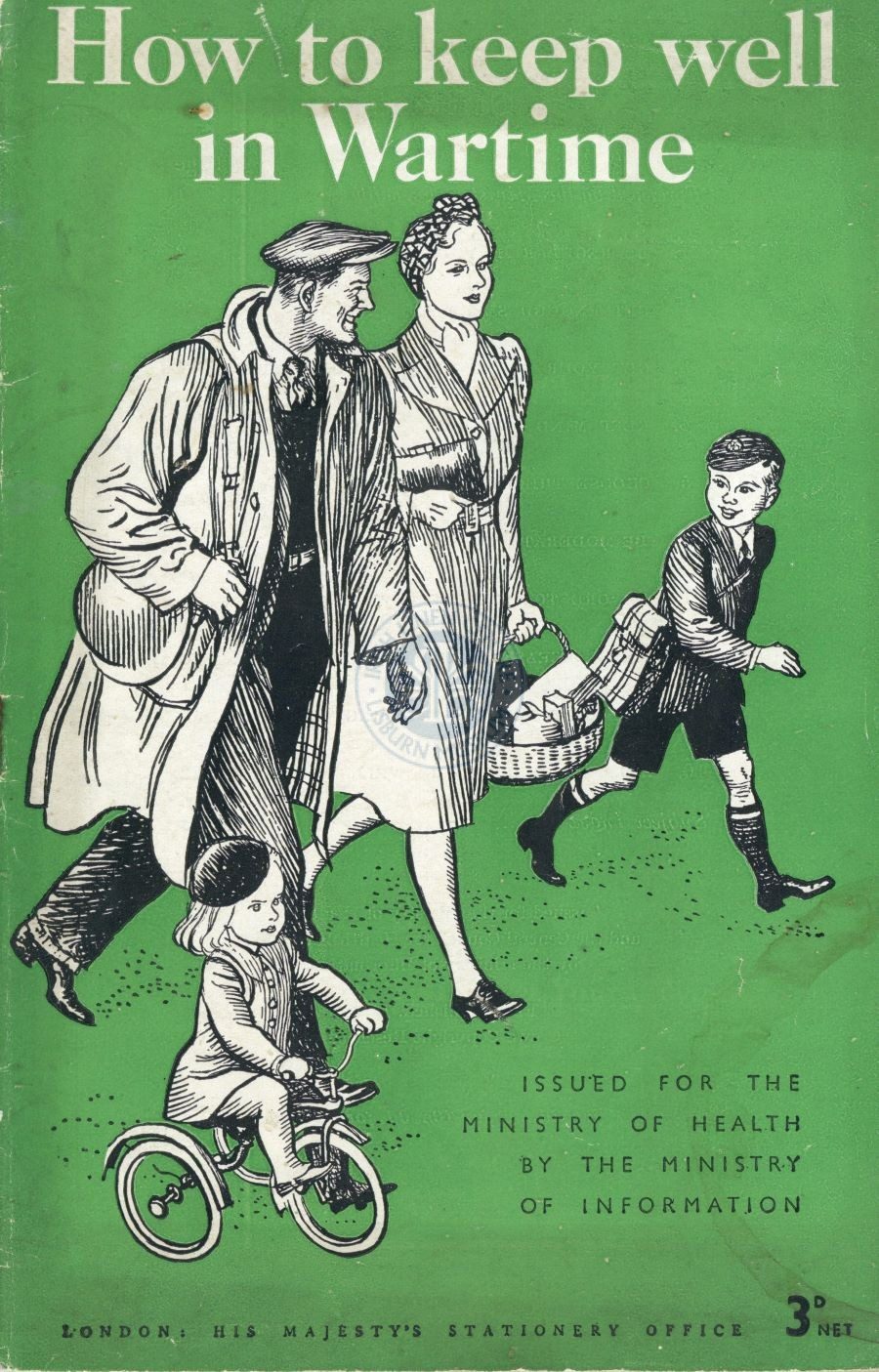 Pamphlet, ‘How to Keep Well’, Ministry of Health and the Central Council of Health Education, 1943
As well as encouraging people to grow their own food, the Ministry of Information published this guide to ‘simple safeguards, common sense rules, and the good habits which we can make part and parcel of our everyday lives’.
ILC&LM Collection

Many local industries re-tooled to support the war effort.  In Lisburn the Altona factory on the Hillsborough Old Road churned out fuselages for Stirling Bombers. Nearby, Duff’s Largymore Cabinet Works produced aircraft wings for the Stirlings alongside the ‘utility’ furniture it still produced. The government placed restrictions on the style and materials used. Part of Glenmore bleachworks was also used as an electrical workshop for Short and Harland after the Belfast Blitz (April, 1941). 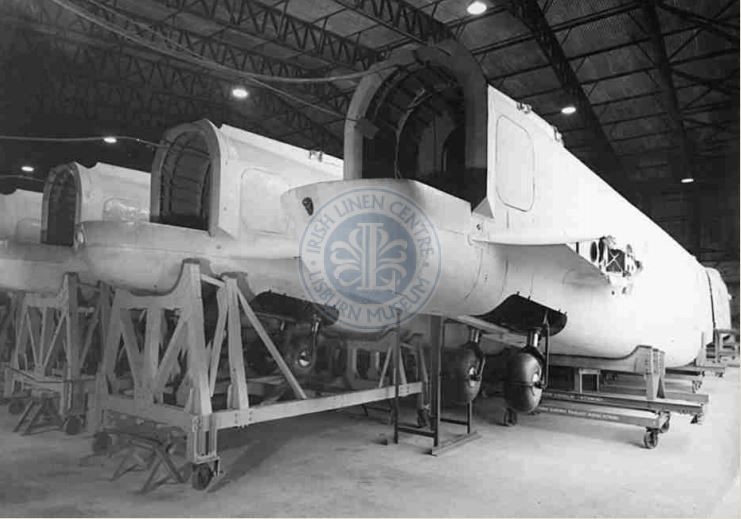 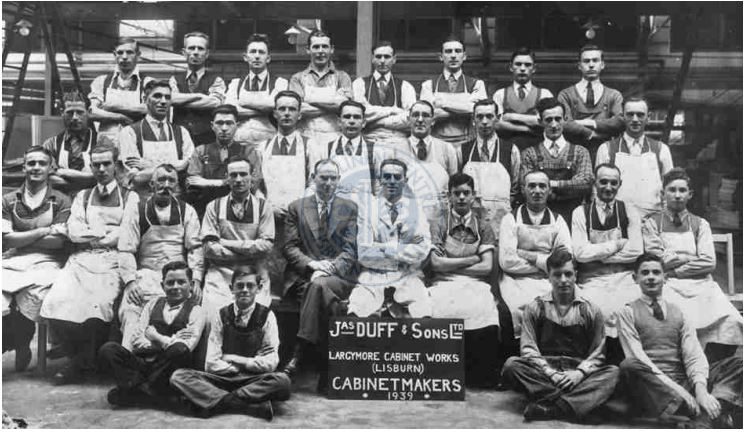 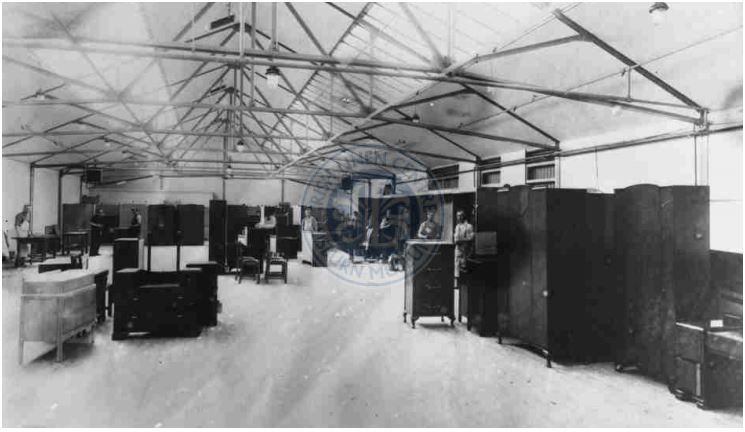 The Great War had famously been ‘won on Belfast linen wings’, and reliance on linen for aircraft fabric and parachute webbing continued during the Second World War. Before the advent of artificial fibres, linen was used to produce uniforms, boot laces, kit bags, bandages, tents, and linen thread for stitching. Many linen-producing factories – including Ewarts’, Belfast, or Herdman’s of Sion Mills – started churning out munitions, with women undertaking much of this work. Increasing demand for linen saw a fourfold increase in flax acreage under cultivation in Northern Ireland, while the south of Ireland boosted its yield for use in the north. Estimates suggest 200 million yards of cloth were woven, and two million parachutes were produced. 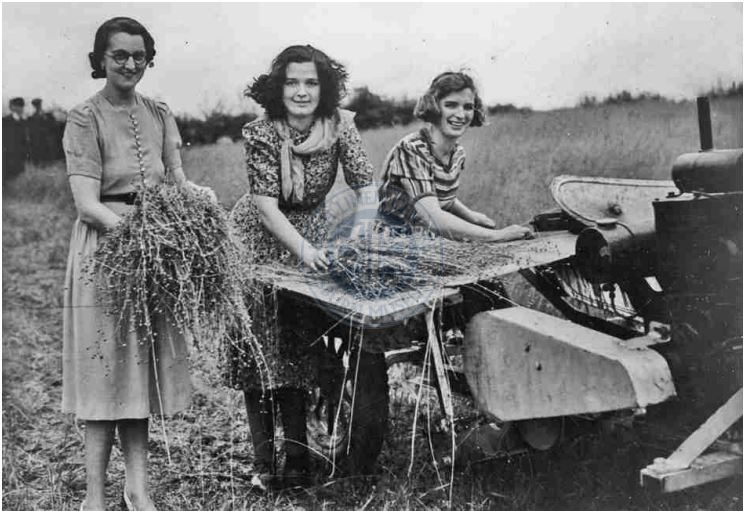 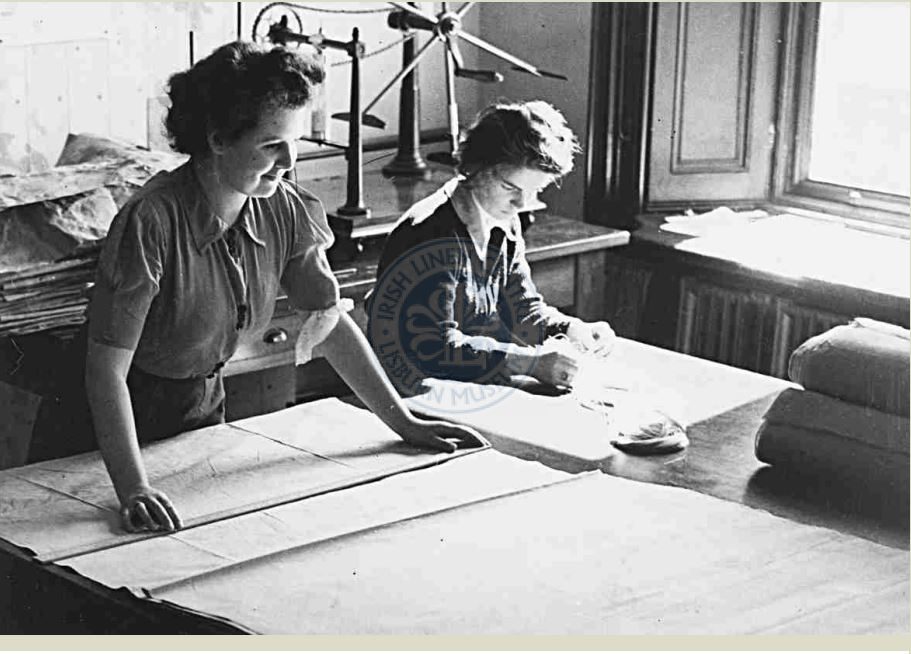 ..but for the province’s ‘loyalty and friendship‘, the British people ‘should have been confronted with slavery or death’..