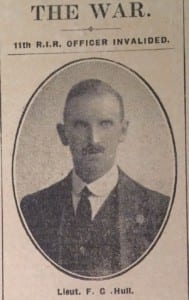 In August 2016 the Olympics Games will take place in Rio, Brazil, and for the first time in 108 years the Irish Hockey Team will contest the finals (although men from Northern Ireland will compete with both Ireland and Great Britain hockey teams).  In the same year that Ireland reached the  Olympic finals, 1908, Fred Hull (1888-1965), a bank clerk living in Seymour Street, became Lisnagarvey’s first international hockey player.  Hull made his debut as a substitute in a match against Wales, and research is ongoing to clarify if this was during the Olympic finals (October 1908), or at some other time in 1908.  If Hull made his debut during the Olympic game, he would undoubtedly become one of the first, if not the first, Olympian from the town.

Six years after Hull’s debut for Ireland he was commissioned as a 2nd Lieutenant in the 11th battalion Royal Irish Rifles, becoming a captain.  He survived the war, although wounded.

More information on Hull – including his first Irish international cap and an Official programme for Ireland v Wales – as well as stories of other men from Lisnagarvey Hockey Club, who fought in the war, is available in our new exhibition: ‘The Somme, Our Story’.