Exhibition exploring the life of Rev David Corkey, Chaplain to the Ulster Division, is celebrated with presentation to the Museum

An artwork dedicated to Rev David Corkey (1882-1984), Minister at Dundrod Presbyterian Church and Chaplain to the 36th (Ulster) Division during WWI (1914-18) was recently presented to the Irish Linen Centre & Lisburn Museum.  The generous donation by the artist Colin Corkey, Rev Corkey’s great-nephew, was celebrated at a lunchtime opening of an exhibition exploring the Chaplain’s life on Saturday 30 November 2019.   The event was attended by a large audience, including the grandchildren and family of Rev Corkey.

After a talk from Museum staff on the historical background to the exhibition the artist, local-resident Colin Corkey, discussed the inspiration behind his artwork.  The Triptych is a three-panelled artwork exploring the life of his great uncle during and after the Great War, and weaves together poetry, prose and biblical verse.  The artwork is accompanied by a display of objects, letters, photographs and ephemera relating to Rev Corkey, from his time in the Shankill mission to experience at the front during the war.

In officially opening the exhibition Alderman James Tinsley, Chairman of the Council’s Leisure and Community Development Committee, said: “Rev Corkey was a popular and dedicated chaplain to many Irish men during the First World War, as well as minister at Dundrod Presbyterian Church, which is close to my own ancestral home.  I am delighted to open the exhibition, and encourage visitors to call in and view the display and learn more about this fascinating local man and his experience of the Great War.”  In concluding, Alderman Tinsley thanked the artist for the generous donation of what is a “striking and thoughtful” artwork.

The exhibition and painting are currently on temporary display in the Ground Floor Gallery of the Museum.  Entry is free.  More form information visit lisburnmuseum.com

Rev David Corkey (1882-1924) was minister at Dundrod Presbyterian Church from 1911, having previously ministered at the Shankill Mission.  During the Great War he served as a chaplain to various units on the Western Front, and in particular the 36th (Ulster) Division at Le Havre.  In 1916 Rev Corkey lost his left arm to a shrapnel wound, and in November his first wife died suddenly.  Returning to Dundrod in 1919 to resume his ministry, he remarried and had two daughters before his early death in London in 1924. 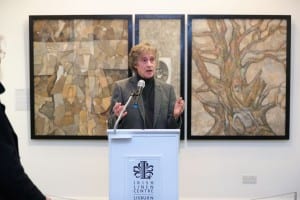 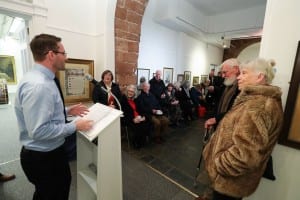 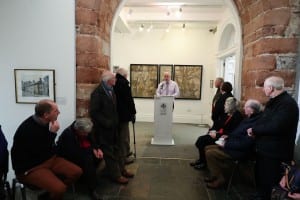 Alderman Tinsley speaking at the event 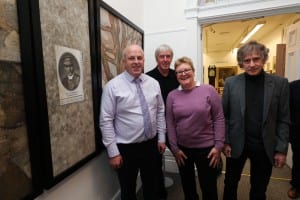 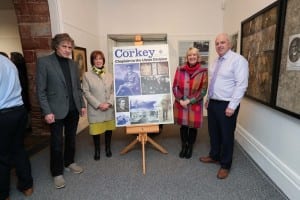 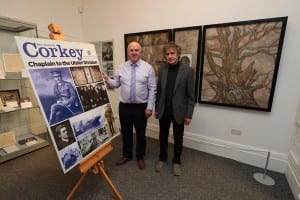 Alderman James Tinsley alongside the artist, Colin Corkey with the Triptych.