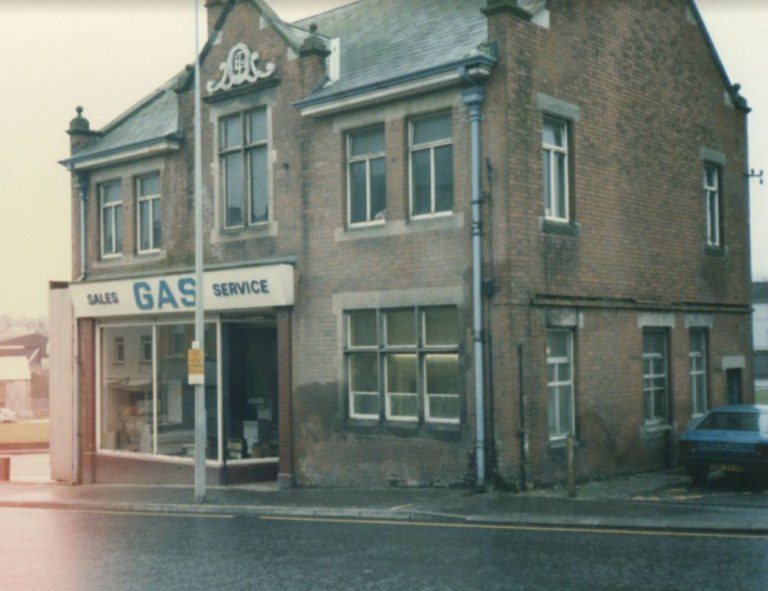 The Lisburn Gas Company Limited was formed in the late 1830s to produce gas for domestic and commercial use in the town.  The gasworks was located beside the Lagan, although the gas office was on Bridge Street.  The Urban District Council crest, which can be seen above the top middle window, is currently in the Museum’s collection.

The gasworks produced gas from coal brought to the town on the Lagan.  The National Gas Museum explain the process simply:

The basic process for making gas from coal used in the early 19th century remained essentially unchanged right through until the last coal gas works closed in the 1970s. Coal in a closed tube called a retort was heated in a furnace. The gasses given off – mainly hydrogen and carbon monoxide – passed through a water trap (“hydraulic main”) and were then cooled in a condenser, where tar and some other liquids were removed. The gas then passed through a purifier to remove sulphur compounds and other impurities before being used or stored in a gas holder. Later in the 19th century, steam driven exhausters were introduced to pump the gas through the gas works and into the mains system.

These retorts had to be filled with coal (“charged”) and emptied by hand, which was hot, back-breaking work. Later in the 19th century, mechanical charging and vertical or inclined retorts were introduced in the larger gas works but hand-charging of horizontal retorts continued at small town gas works until they closed in the 1960s.