King George V’s visit to Belfast, and the reaction in Lisburn.

The first sitting of the new parliament of Northern Ireland was held in early 1921 at Belfast City Hall, with King George V officially opening proceedings on 22 June 1921.  The ceremony took place against a background of continuing sectarian violence in the north, and there was a heavy security presence as the sovereign steamed into Belfast Lough and made his way by carriage to City Hall.  Here, King George delivered a speech calling for:

“all Irishmen to pause, to stretch out the hand of forbearance and conciliation, to forgive and forget, and join in making for the land they love a new era of peace, contentment and goodwill.”

But the north was deeply divided. For Unionists, this was a day of celebration – Northern Ireland was secure within the empire. Yet, nationalist MPs refused to attend the opening, and the Catholic minority largely ignored the proceedings. 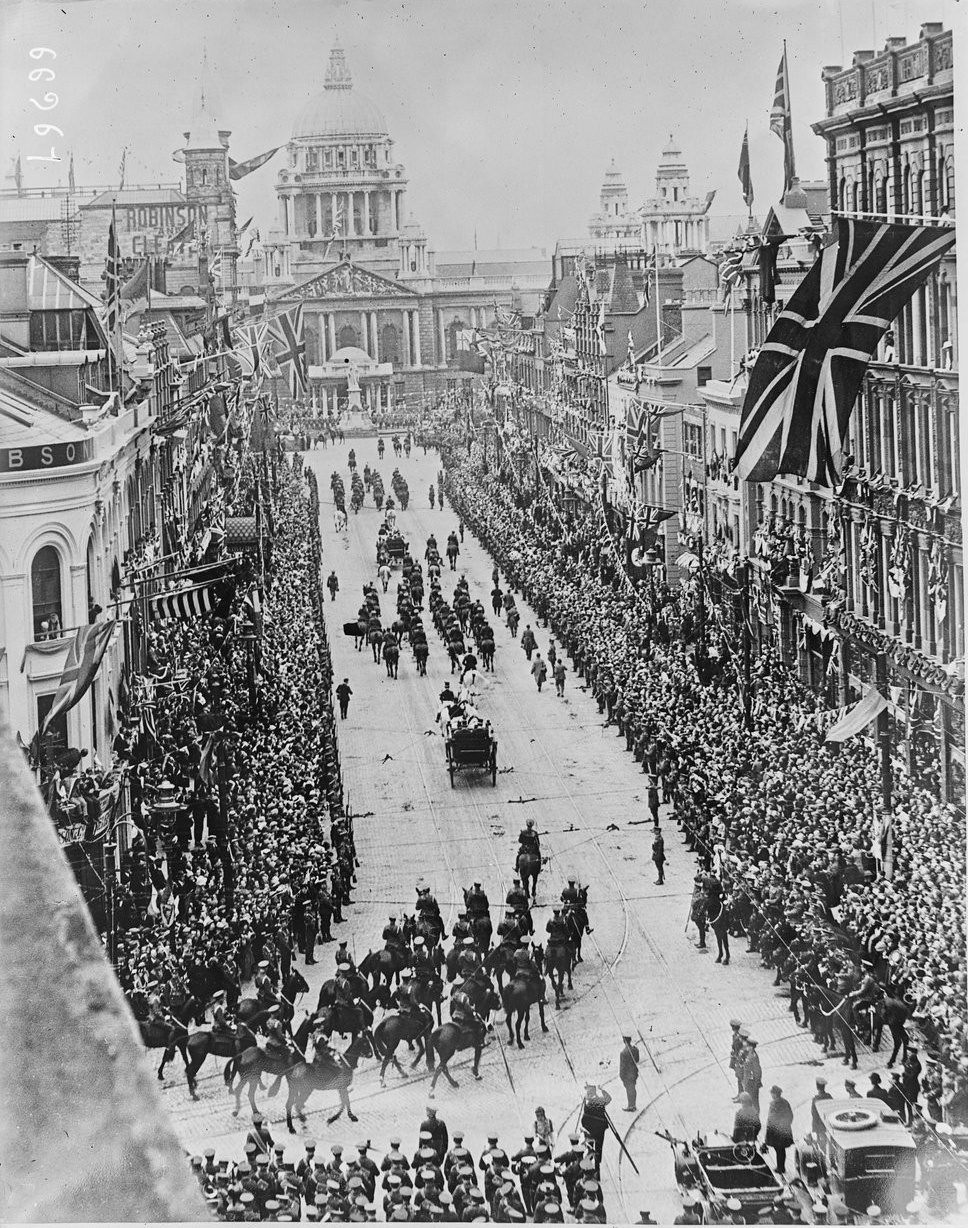 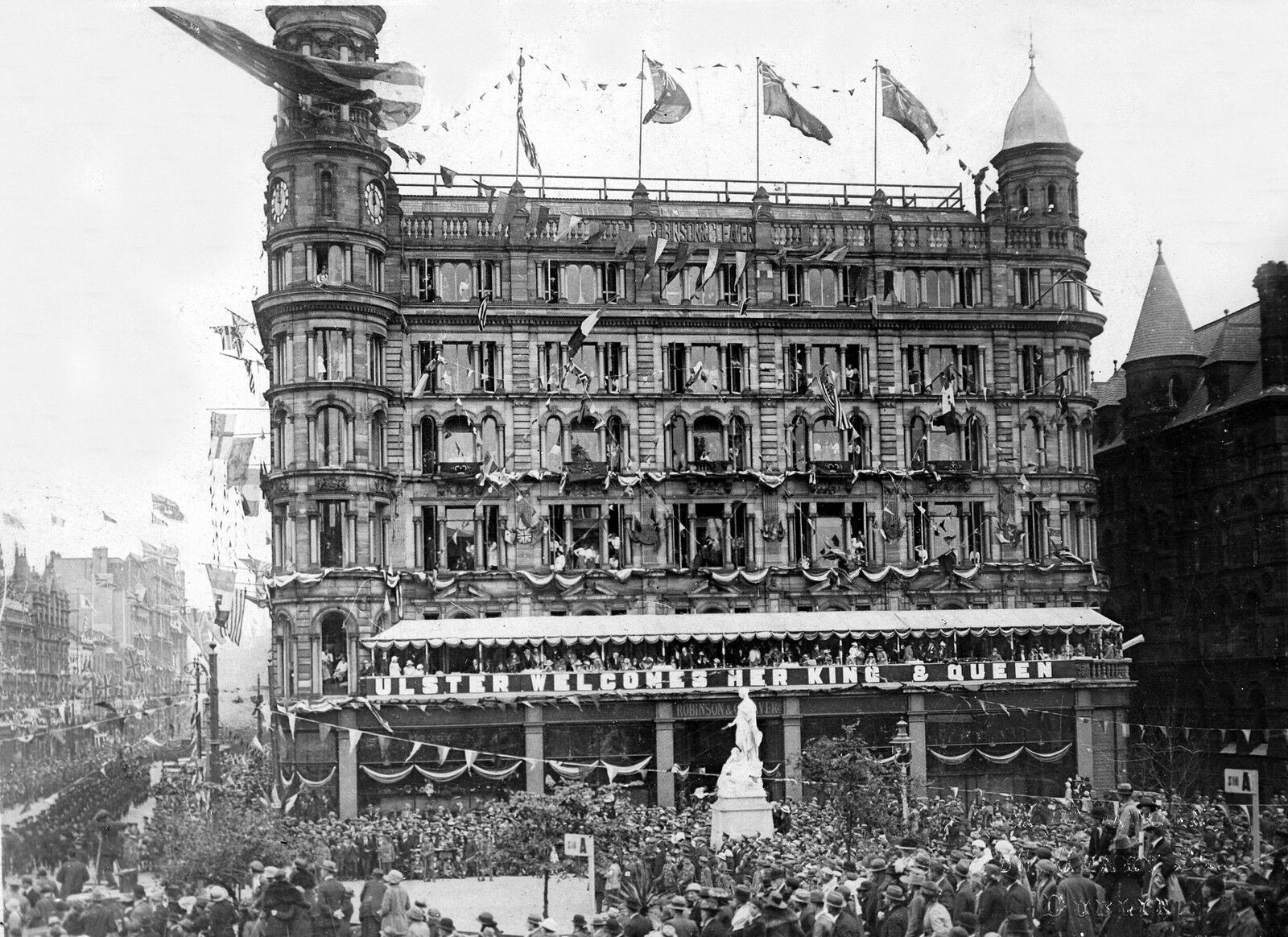 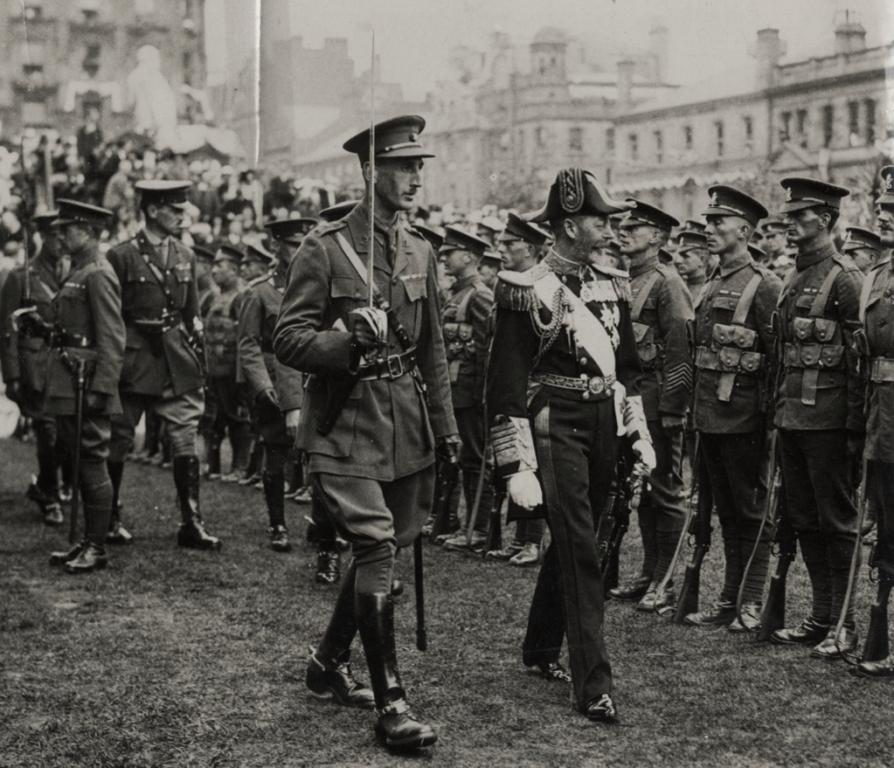 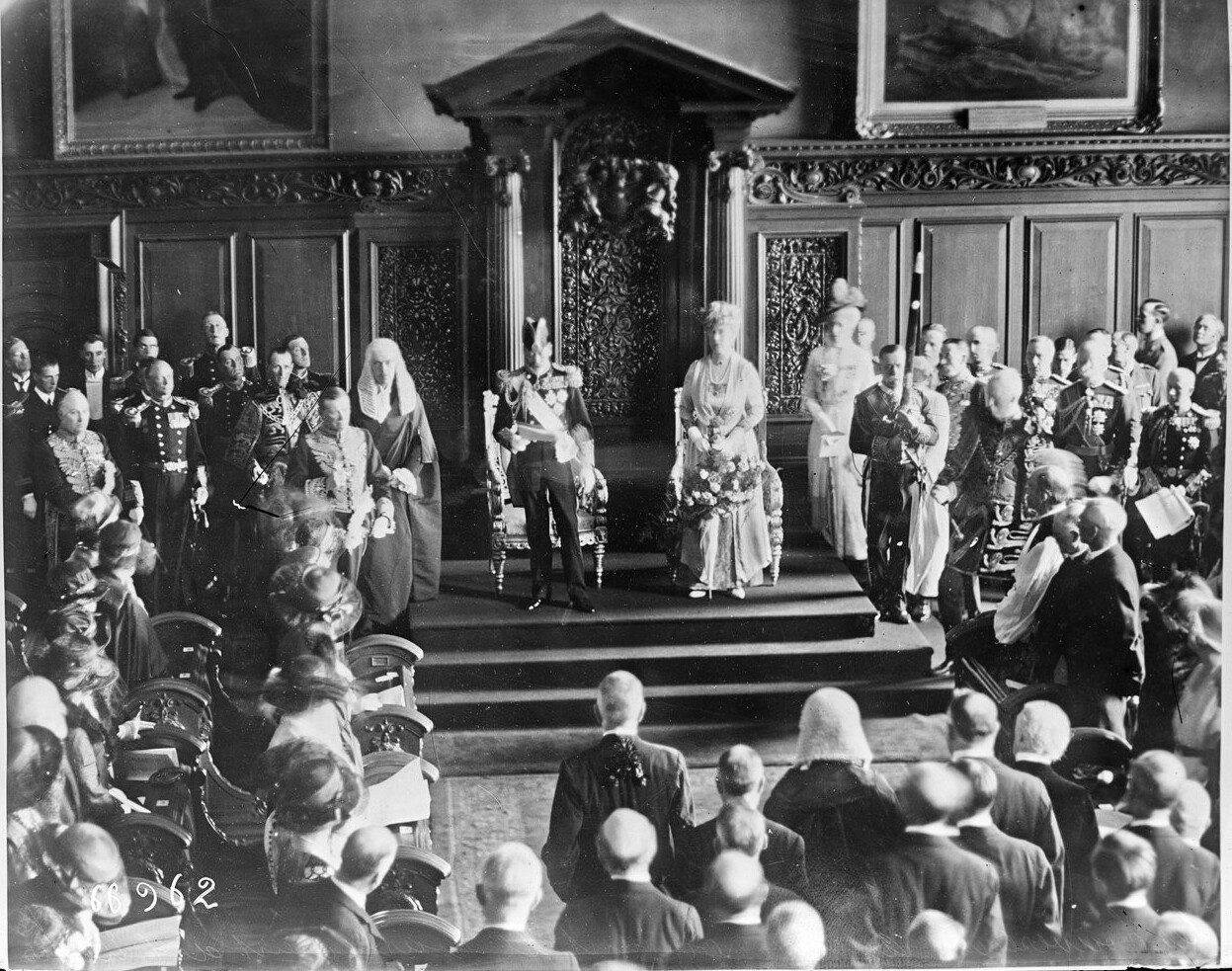 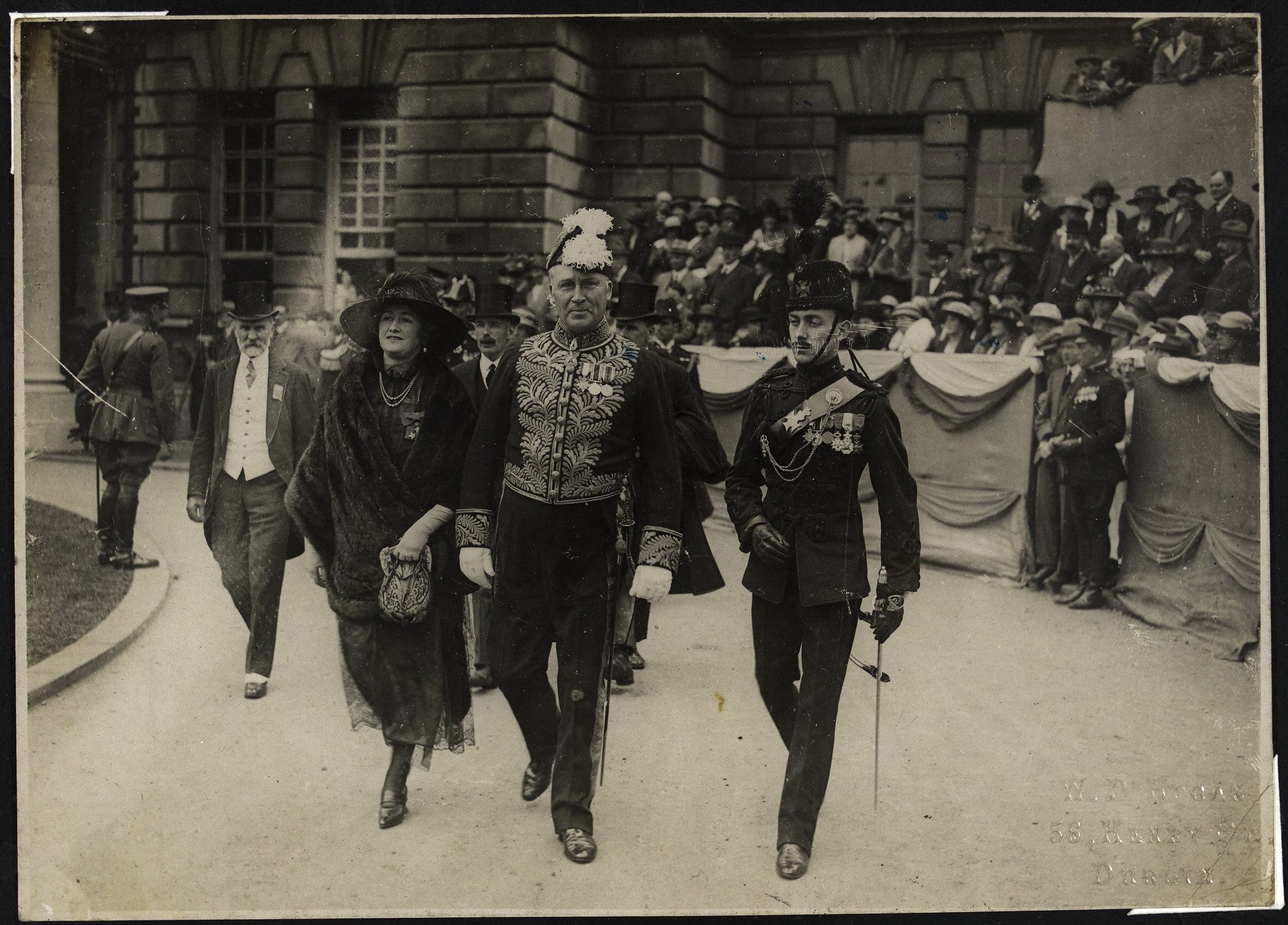 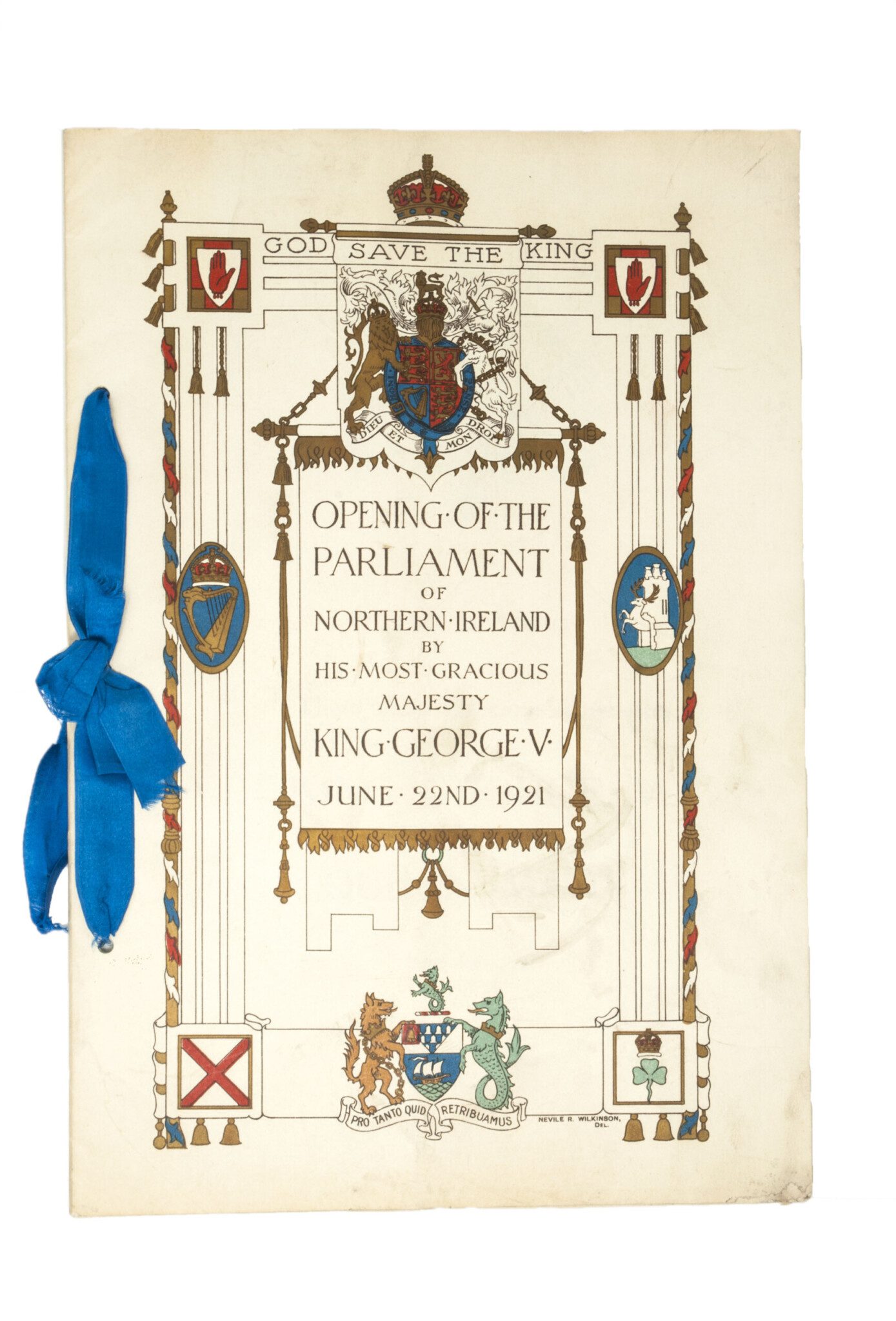 Video: Opening of the Northern Ireland Parliament, 22 June 1921
This video contains an audio description. Please make sure your sound in enabled.

Object: programme for the opening of the Northern Ireland Parliament, 1921

This is the official programme for the opening of parliament, 22 June 1921. It was printed by the Belfast firm R. Carswell & Sons, Queen Street, with designs by the Major Sir Nevile Rodwell Wilkinson (1869-1940), the Ulster King of Arms.  He was likely responsible for the heraldic symbols on the cover.

The opening of parliament took place at Belfast City Hall, and we can see the coat of arms of the city of Belfast at the bottom of the front page.

King George V and Queen Mary arrived by Royal Yacht at Donegall Quay, where commissioners for the Belfast Harbour Board delivered an address. Lisburn’s own John Milne Barbour was in this party.  As they travelled to City Hall in an open-top carriage, the streets were thronged and decked out in Union flags.  From a throne at City Hall, the King delivered his famous speech, before departing for a civic event at the Ulster Hall.

Video: Programme and ticket for the reception at Ulster Hall, 22 June 1921
This video contains an audio description. Please make sure your sound in enabled.

Object: ticket and programme for the Ulster Hall, 1921

The first is a programme for the Ulster Hall ceremony, 22 June 1921, attended by King George V and Queen Mary following the state opening of parliament at Belfast City Hall. At this ceremony, various councils presented addresses to the sovereign, before several investitures took place. Lord Pirrie, chairman of Harland and Wolffe shipbuilders, was created Viscount.

This ticket is a very rare memento of the Ulster Hall visit, issued on behalf of the Prime Minister and the new Northern Ireland government. While the main body of the ticket could be retained, the stub (marked with a red A) was to be given up at the entrance of the hall. This lucky attendee held on to their stub, taping the two sections together. 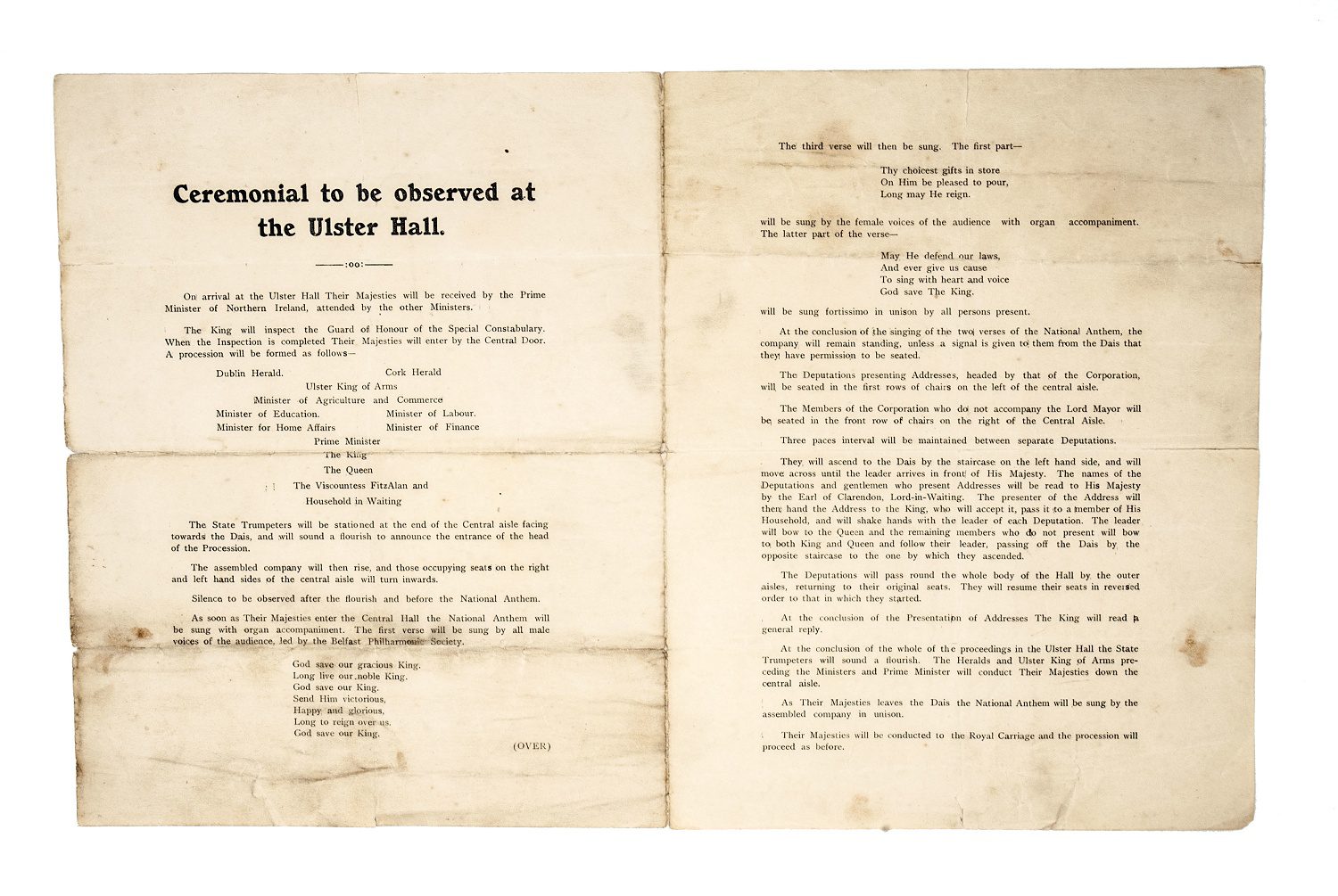 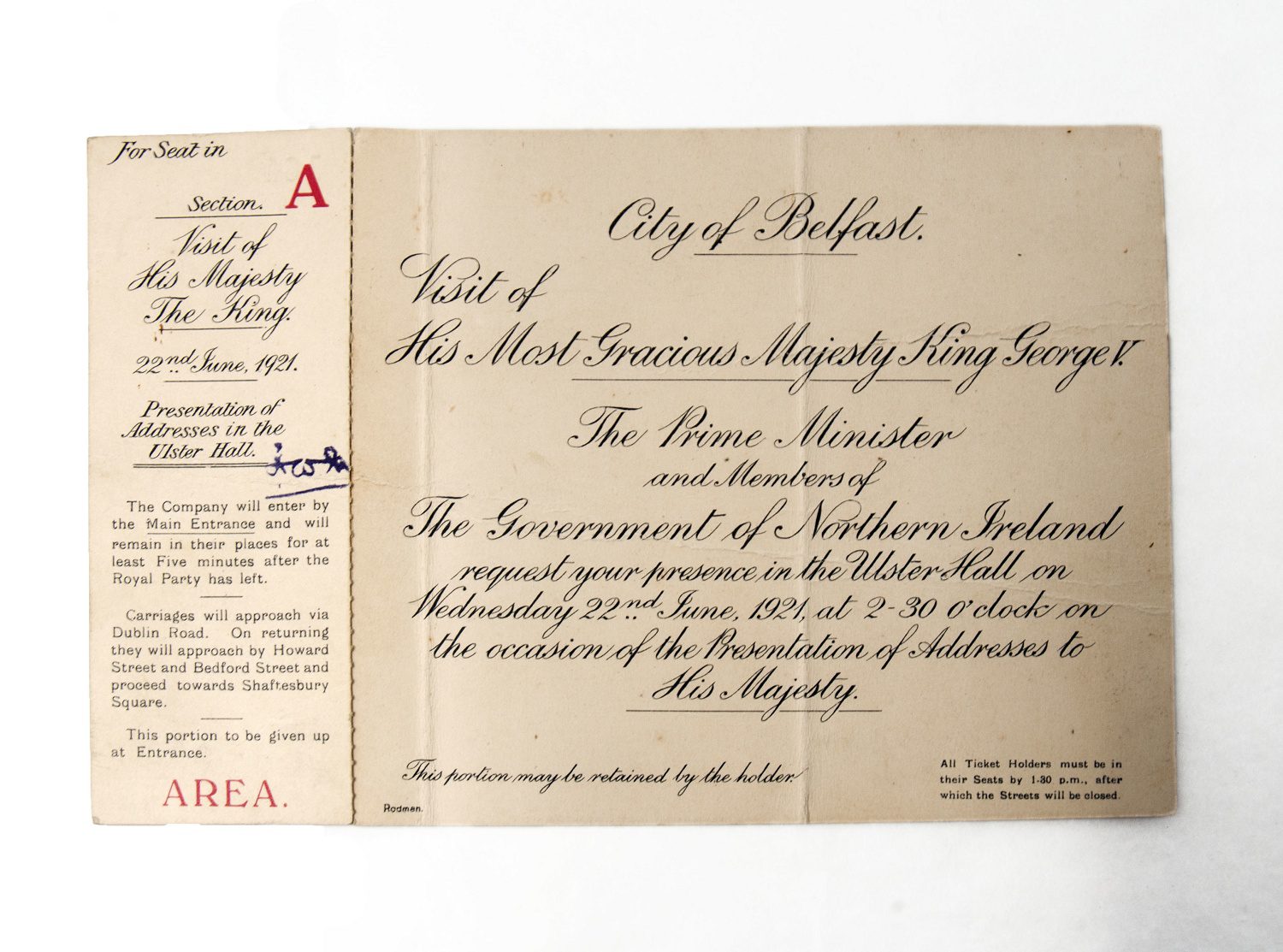 In Lisburn, many enjoyed the day off and flocked to Belfast by train to watch the procession. Lisburn Urban and Lisburn Rural District Council sent welcome addresses to the King, expressing their loyalty to the throne and praying that ‘peace, happiness and prosperity’ be restored to Ireland.

In the days after the official opening of parliament, the I.R.A. bombed a train of Hussars, who had provided an escort to the King in Belfast, at Adavoyle, outside Newry. Four officers, two civilians and 80 horses were killed. Within three weeks, over 25 were dead, and hundreds were left homeless in Belfast.

The Northern Ireland Parliament sat in Assembly’s College (now Union Theological College) until 1932 when it moved to the newly-constructed Parliament Buildings at Stormont, East Belfast. 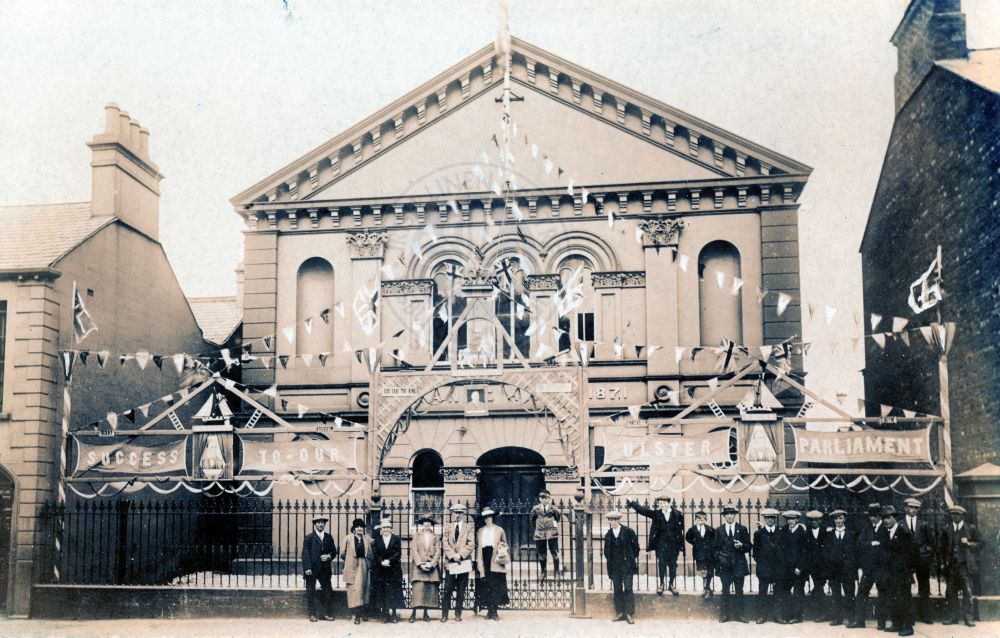 Locals standing outside Lisburn Orange Hall, which has been decorated to celebrate the establishment of Northern Ireland.  The banner reads ‘Success to-our Ulster parliament’. The hall, on Railway Street, is close to the station, where many caught the train to Belfast, where they enjoyed the occasion.

As a loyal subject of his Majesty… I deeply regret the object of his visit, feeling as I do that the setting up of a Parliament for Northern Ireland will only have the effect of building greater walls around Ulster than those which already exist, and of perpetuating those prejudices and misunderstandings which have kept North and South apart for so many years. A love for Ireland, and a desire to see her people happy, prosperous, and united, are not, however, incompatible with loyalty to our King, and as a loyal Irishman and a loyal Britisher.