1 – Ireland after the Great War


What was Home Rule?  Was it implemented after the War?

The issue of Home Rule – the right to self-government within the British Empire – had brought Ireland to the brink of civil war in 1914.  On one side, Irish nationalists demanded a parliament in Dublin.  On the other side, Unionists, largely based in Ulster, wished to retain the link with the United Kingdom and had raised an army, the Ulster Volunteer Force (U.V.F.), to support their cause.

In September 1914 Home Rule was granted, however the parliamentary act was suspended due to the outbreak of the Great War (1914-18). An amending bill, temporarily excluding six unionist counties in the north east from southern control, had been proposed as one solution to the ‘Ulster problem’.

By the end of the war, in late 1918, the political landscape in Ireland had changed. Constitutional nationalists had been swept aside by the popular, separatist Sinn Féin party. For them, Home Rule was not enough, they demanded an Irish republic. On 21 January 1919, Sinn Féin and its member convened the First Dáil or parliament, in Dublin and declared independence. On the same day, the opening shots of the Irish War of Independence (1919-21) were fired in Tipperary, killing two R.I.C. constables. 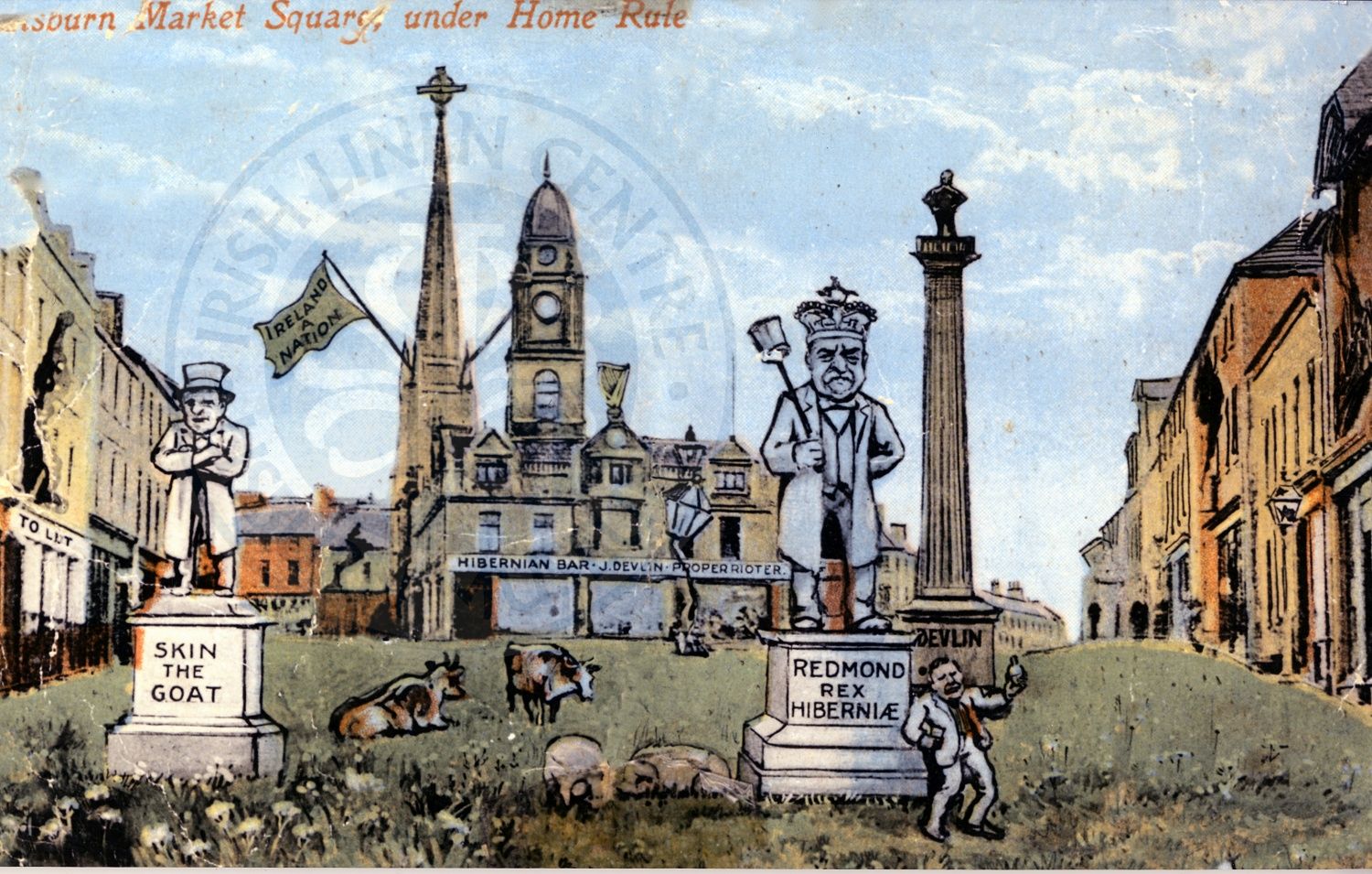 As this postcard shows, unionists were fearful of Home Rule. Under an Irish parliament, Market Square would go to ‘rack and ruin’, and a statue of the Irish nationalist John Redmond would take pride of place.

Lisburn, Co. Antrim, was a unionist town, and had fiercely resisted Home Rule. In 1912, thousands of townspeople had signed the Ulster Solemn League and Covenant and Women’s Declaration, and raised three U.V.F. battalions – the South Antrim Volunteers – to maintain the status quo.   After the war, Charles Curtis Craig (1869-1960) was, again, returned as M.P. for South Antrim.  He had first won the seat in 1903 with the help of his younger brother James Craig (1871-1940), the future prime minster of Northern Ireland.

In the early 1920s, Lisburn was busy and industrious.  It was home to some of the world’s most famous linen manufacturers, from the Linen Thread Co., with headquarters at Hilden, to Coulson’s Damask manufactory, producers of fine table linens. Lisburn Urban District Council (L.U.D.C.) was responsible for the town’s amenities and services, and while over 12,000 people lived within its boundaries, almost 50,000 people lived in the surrounding area, and helped maintain the town’s position as a busy commercial and market centre.  The back pages of Lisburn’s two newspapers – the Lisburn Standard and Lisburn Herald – were filled with sport fixtures, from boxing to hockey, golf to cycling, and hinted at the town’s rich social and cultural life.