Lisburn & Castlereagh City Council has opened a new public exhibition ‘The Somme, Our Story’ in the Irish Linen Centre and Lisburn Museum to mark the Centenary of the Battle of the Somme.

The Mayor, Councillor Brian Bloomfield MBE, the Mayoress, Rosalind Bloomfield and Councillor Tim Morrow, Chairman of the Council’s Leisure & Community Development Committee recently visited the exhibition that opened on the 1st July, the first day of the Battle of the Somme in 1916.

Speaking about the Exhibition, the Mayor, Councillor Brian Bloomfield MBE, said: “This informative exhibition is largely about the local battalions of the Royal Irish Rifles, the 11th, South Antrims and 13th, County Downs, pals formations drawn from the territorially based Ulster Volunteer Force which, formed in 1913 to resist Home Rule for Ireland, made up the 36th (Ulster) Division. 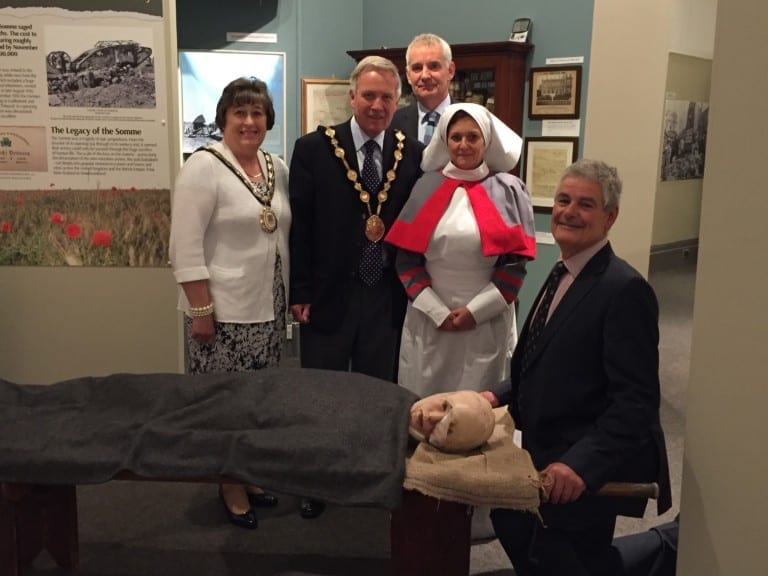 “The division famously ‘went over the top’ on the 1st July 1916 and at terrible cost captured most of its objectives before being forced back to its start lines. The Centenary of the Battle of the Somme provides an opportunity to remember the sacrifice of those who lost their lives and reflect upon the human cost of conflict. I was humbled during my recent visit to the Somme to view the graves of all the brave soldiers that valiantly gave their lives for the freedom of future generations and to lay wreaths on behalf of the Council to show our respect for their commitment and dedication.”

Across Northern Ireland on the 1st July memorial services were held to commemorate the 100th anniversary of the first day of the Battle of the Somme. A particularly poignant Service of Remembrance attended by the Deputy Mayor and Members of Council was held at Lisburn War Memorial in the early morning to coincide with the timing of the start of the Ulster Division’s attack at Thiepval.

Councillor Tim Morrow, Chairman of the Council’s Leisure & Community Development Committee, added: “It is great that the Council’s Museum has secured such an important collection of artefacts, photographs and memorabilia to illustrate this exhibition. ‘The Somme, Our Story’ is about the men and women from Lisburn and Castlereagh who served in World War One and shows how their service impacted on their families back home. It also explores other contributions to the War, from the heroic work of the medical services to local industries manufacturing vital war materials. It is an informative free exhibition that can be appreciated by all ages.”

The Council would encourage residents and visitors to view this exhibition in the Irish Linen Centre and Lisburn Museum.