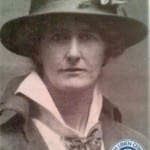 The Irish Linen Centre & Lisburn Museum has acquired a rare medal awarded to local suffragette Lillian Metge.  The medal was presented to Mrs Metge in recognition of a hunger strike she undertook in August 1914 while on trial for her alleged role in blowing up the east window of Lisburn Cathedral.  The medal was acquired at a London auction and can be viewed in the museum’s new temporary exhibition ‘A voice of her own? A women’s place after the Great War’.  Admission is free.

Chair of Lisburn & Castlereagh City Council’s Leisure and Community Development Committee, Alderman Paul Porter, commented that “although I do not agree with the methods Mrs Metge employed, the medal is a hugely significant addition to the museum’s collection, and its acquisition marks an important chapter in the local ‘votes for women’ campaign. The attack on Lisburn cathedral was the most militant attack in Irish suffragette history.”  The Chair continued: “suffragette medals are extremely rare, and we are pleased that the medal should be returned to Lisburn and put on display.”

Dr Margaret Ward, historian and expert on the Irish suffrage movement, said: “it is wonderful to have the Metge medal where it belongs, in Lisburn”.  Adding that Mrs Metge “was awarded the medal after the First World War had begun. So although the WSPU had immediately called off the militant campaign, they still honoured those who had undertaken militant action on the brink of war. As militancy had mainly stopped in Britain, the awarding of the medal to Metge, and presumably to the others involved in the Lisburn Cathedral bombing, would be very rare indeed.”

The acquisition was generously supported by NIMC’s Acqusition Fund, a stream of funding open to Accredited members of NIMC. The Fund assists museums to acquire objects, artefacts and specimens for their collections.

Lillian Metge was born in Lisburn, and was a founding member of Lisburn Suffrage Society.  In 1914 she joined the Women’s Social and Political Union, or WSPU, the umbrella body for militant suffragettes.  She was arrested 1 August 1914 for her alleged role in the attack on Lisburn Cathedral, which caused only minor damage.  While on trial she went on hunger strike, and was awarded the medal in recognition of her sacrifice.

The WSPU began awarding medals in 1909, in recognition of suffragettes who had gone on hunger strike or were force-fed while in prison for a militant act as part of the ‘votes for women’ campaign.  The medals are extremely rare, and there are no known WSPU Hunger Strike medals in any museum or collection on the island of Ireland.