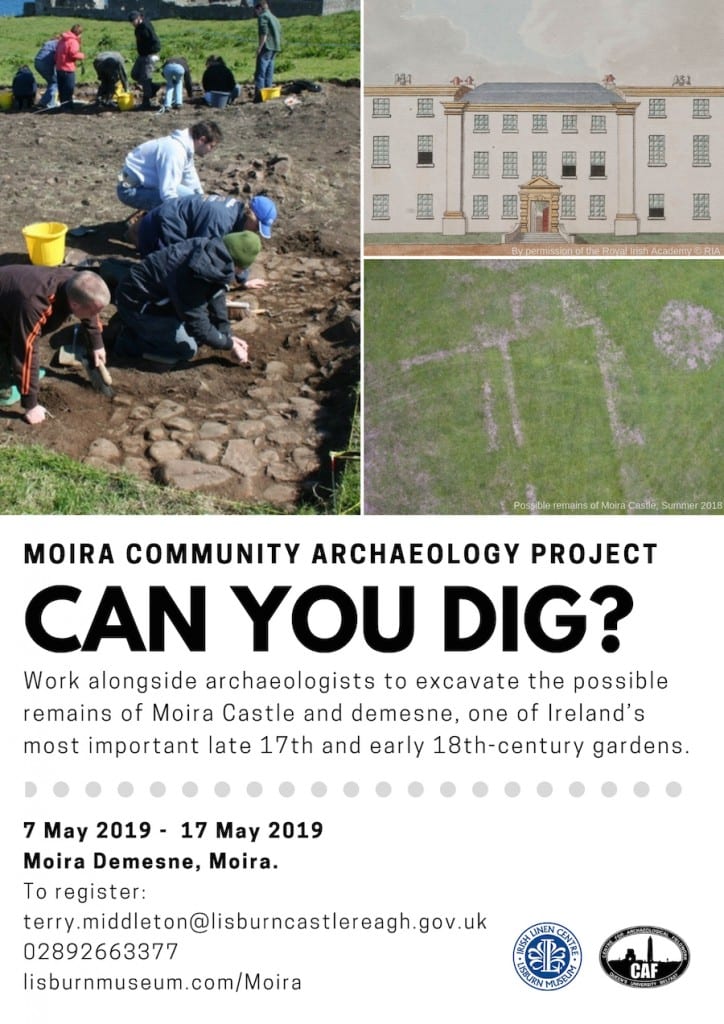 The hot weather in summer 2018 revealed the possible remains of Moira Castle.  In March 2019 the Irish Linen Centre & Lisburn Museum, funded by Lisburn & Castlereagh City Council, partnered with the Centre for Archaeological Fieldwork (CAF) at Queen’s University Belfast to conduct a geophysical survey of the site, with potential to conduct archaeological investigations.

The geophysical survey has identified a number of areas of interest, namely M1, R1 and R2 in the attached map.  These may correspond to the walls of the 18th-century castle and out-house (M1 and R2) and, of great interest, possibly a mid-17th century castle.

Can you dig?  If so, get involved!

From 7 May to 17 May 2019 the CAF, in conjunction with Lisburn Museum, will be leading an excavation of the site.  Volunteers are invited to take part in the excavation, from 1.30pm-4pm on the following days:

Booking is essential as places are limited.  Volunteers can take part on multiple days (we reserve the right to limit this), and a limited number of spaces for an evening dig may be available.

What do I need to volunteer?

Places are open to all ages, and there is no cost to take part.  Volunteers under 18 must be accompanied by an adult.

All equipment will be provided. As volunteers will be working outdoors they should bring waterproof and windproof clothing, sun cream, wide-brimmed hat as well as gardening gloves. Working shoes or preferably boots should be worn on site.

Volunteers should bring a snack and a drink with them for their break.  Toilet facilities are available.

Note: Excavation involves physical effort and that you should be fit enough to dig, shovel, and trowel.

A brief history of Moria Castle and the Demesne

Major Edward Burgh purchased the site of the current Moira Demesne in 1639 and is believed to ‘have built a fine brick house at Moyragh’ in 1651.Sir George Rawdon (1600-84), Burgh’s commander, owned the house in the 1650s.  He was land agent to the Conway family, the landlord of the territory in and around South Antrim and east of Lough Neagh from 17th century onwards.

The Rawdon family had an interest in botany and were responsible for creating the garden at Moira.  At great expense Sir Arthur Rawdon (1662-95) employed James Harlow to bring back over 1,000 trees and shrubs from Jamaica and had a conservatory, possibly the earliest in Ireland, erected in the Demesne in 1690.  Sir Arthur shared specimens from Moira with a network of landscapers throughout the British Isles as well as botanical gardens in Amsterdam, Leipsig and Leiden.

Elements of the gardens Sir Arthur planted remained in the mid-18th century.  Walter Harris, writing in 1744, described how ‘a handsome well planted and full-grown Avenue’ led up to ‘the House of Sir John Rawdon [note: Sir John Rawdon, 1st Earl Moira (1720-93)] . . . The Improvements and Gardens here are extensive, the Walks, Vistoes, and Espalliers regular and grown to Perfection, and furnished with Variety of good Fruit. The Garden is adorned with a pretty Labyrinth, Ponds, Canals and Wood cut out in Vistoes…Upwards of fifty years ago Sir Arthur Rawdon employed one James Harlow, his Gardener, to go to Jamaica to bring from thence come exotick Trees and Plants for these Gardens; in which they have grown to great Perfection, and some of them still remain [SIC].’

By the mid-18th century the three storey, nine bay house (a five bay centre with a two bay extension on either side, followed by single storey wings) commanded an elevated position over the fledgling town of Moira, and directly opposite St John’s Church, which was consecrated in 1723.William Sharman (d.1803), MP for Lisburn (1783-90) in the 1770s leased the estate from John Rawdon (1720-93), 1st Earl of Moira.

In 1799 the artist and antiquarian Gabriel Beranger (1725-1817) published perhaps the most detailed view of the house, in a watercolour painted by one of William Sharman’s daughters.  During his visit to the estate he enjoyed the library, and gave the following description of this: ‘commodious habitation’.  It is ‘surrounded by a wood which affords beautiful shady walks; a large garden extends in front, where sheep are feeding, which is terminated by trees, and a small lough eastwards; the rear contains a wood, with large opening fronting the castle which forms a fine perspective’.