Last weekend I had the opportunity to visit Cardiff. As I explored the city, particularly the castle, I noted that both Lisburn and Cardiff have similar histories. For example:
1. Both have histories that can be traced back to the First Millennium, and beyond. Lisburn, and its name, owes much to the Early Christian (500-1000 AD) ringfort that was situated north of today’s Wallace Park, while Cardiff, as we might know it today, was largely established in Roman-era Britain (1-400AD). The towns draw their names from both these forts: ‘Fort of Didius’/ Caer Didi / Cardiff and ‘Fort of the gamsters’ / Lios na gCearrbhach / Lisnagarvey / Lisburn.

4. Industry was important to both towns: Lisburn, of course, is famous for its association with linen, while Cardiff is well known for its port and the export of coal.

I was most struck by the influence of the local landowners, the Butes. Lisburn, of course, was shaped by Sir Richard Wallace (1818-1890). Wallace Park and Wallace High are named after him; Castle House, the Old Town Hall and the former Court House are all monuments to his generosity, as are the Wallace Fountains, dotted throughout Lisburn and Paris. He gave ‘favourable leases’ to encourage development in the town; gave grants for churches, and remodelled the Assembly Rooms (Lisburn Museum). In Cardiff, the Butes – major landowners in the town from the 1770s onwards – showed similar patronage and generosity, from the donation of Bute Park, the development of the port as well as, significantly, the renovation of the town’s castle. Taking charge of the site in the late 18th century the family ploughed significant amounts of money into re-developing and restoring the grounds. For example: 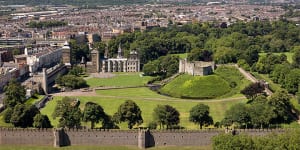 In 1865 Lord Bute (3rd Marquess) invited architect William Burges to present a report on the state of the Castle; it was the beginning of a momentous partnership that was to last for sixteen years, and Cardiff Castle was to be transformed into a Neo-Gothic dream palace. Burges brought together a group of men who were to work with him throughout the restoration of Cardiff Castle. Lord Bute called in distinguished local historians and he assisted with tracing the history of the Castle. He ordered the setting up of the ‘Bute Workshops’ and employed the finest Welsh craftsmen to build furniture. Work started after Bute’s workmen pulled down the houses built against the South Curtain Wall. Burges restored the stonework, and he added a covered parapet walk with embrasures and arrow slits. The Clock Tower was built on the site of a Roman bastion and completed in 1875.

In 1872 Lord Bute married the Hon. Gwendolen FitzAlan Howard. The couple had four children, and Burges designed a Nursery especially for them. Work continued with the rebuilding of the Bute Tower and Herbert Towers, as well as the new Guest and Tank Towers. The 15th century Octagon Tower was restored with the addition of a timber fleche or spire above the battlements. Burges created a Library and the Banqueting Hall within the late medieval residential block.
When Burges died in 1881, his work was continued by his former assistant William Frame. Frame built the Animal Wall and was responsible for restoring the newly discovered Roman remains. The 3rd Marquess died in 1900. His son, the 4th Marquess, continued to restore the Castle Walls and in the period 1922-5 oversaw the reconstruction of the Roman Wall to Duke Street, as well as the building of the Barbican Tower, designed by his architect John Grant. A new entrance hall to the castle was added in 1927. Cardiff Castle largely escaped enemy action during the 2nd World War, although two adjacent lodges were destroyed, and the outer walls were used as air-raid shelters, capable of holding nearly 2000 people.
(‘About the Castle’, last accessed on the 12/01/2014)

In 1947 the Castle was given to the people of Cardiff by the 5th Marquess of Bute. In the same way, after Sir Richard’s death in 1890 Lady Wallace made plans to divest much of the couple’s Lisburn properties and land to the town. Through this initiative Castle Gardens was eventually gifted to the town in 1903, under the eye of Sir Murray Scott. While the 3rd Marquess of Bute relied heavily on his architect William Burges, Sir Richard Wallace favoured the work of Thomas Ambler. He was responsible for Castle House Lisburn, as well as Hertford House in London, in which the Wallace Collection, Sir Richard’s gift to the nation, was housed.

These are just some of the thoughts that struck me as I toured the Castle. Both towns, which have subsequently received city status – Cardiff in 1904 and Lisburn in 2002 – owe much to the architectural vision and appreciation of the land-owning families that controlled them. Interestingly, both Wallace and the Butes (I have in mind the 3rd and 4th Marquesses here) spent very little time in the towns (later cities) that mark their benefactions.