April 25th (Anzac Day), marks the centenary of the Gallipoli Campaign, a series of disastrous allied landings in, what is now, modern-day Turkey during the First World War (1914-1918). Turkey’s entry into the war had cut off the supply route between Britain and France and their ally Russia through the Dardanelles, a narrow strait leading to Turkey’s capital Constantinople and the Black Sea. Capturing this 40-mile stretch of water, by landing and securing the Gallipoli peninsula, became a key allied objective, above all promoted by the First Lord of the Admiralty, Winston Churchill MP. Despite major offensives in April and August the entire campaign was a disaster, and the allies were forced to retreat by the end of 1915. 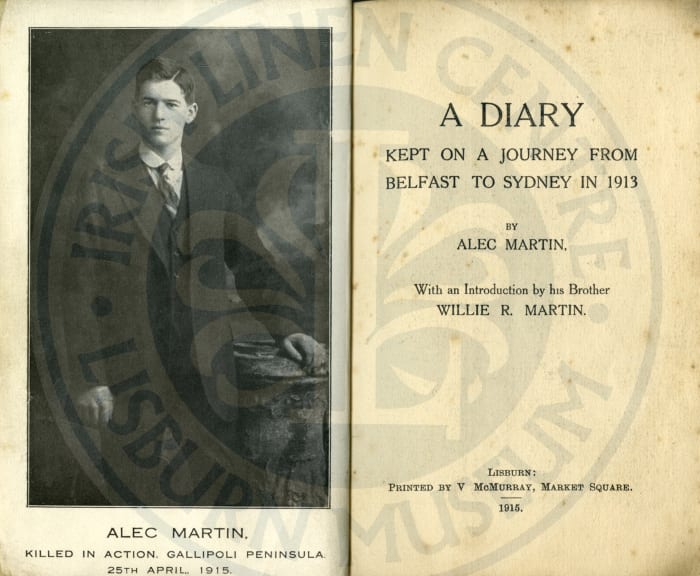 Private Alec Martin’s diary from his journey to Australia 1913, later published by his brother William who joined the Royal Irish Rifles. In the preface Willie wrote a moving tribute to his brother, now ‘taking a hero’s rest on a distant foreign shore’. ILC&LM

Today the Gallipoli Campaign is popularly remembered and associated with the Australian and New Zealand Army Corps – the Anzacs – who first saw action on the peninsula. Many Irishmen fought with the Anzacs. One of these volunteers was Private Alec Martin (b.1895), who emigrated to New Zealand from Magheragall in 1913. When war broke in August 1914 Alec enlisted in the New Zealand Expeditionary Force and after training in Egypt, where he visited the pyramids, he travelled to the Dardanelles. He fought and died there in April 1915 alongside 9000 or so Anzacs.

Alongside the Anzacs and the 10th Irish Division, Irishmen also saw action at Gallipoli while fighting with ‘regular’ British army divisions such as the 29th Division. Private Edward McCormick, for example, was born in Lisburn and fought with the 1st Royal Inniskilling Fusiliers, landing at Cape Helles on the 25th April. Although Private McCormick survived the landings, he was killed in action one month later. 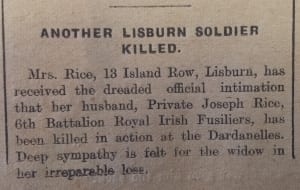 Men from Lisburn and the surrounding district made a huge contribution to the war effort in regiments raised in and outside Ulster, in theatres beyond the Western Front. In this Gallipoli centenary year it is important to remember this.

If you have a story to tell about a relative who fought or died at Gallipoli, or indeed in any theatre of war during the Great War, then please contact Lisburn Museum.

An overview of the Gallipoli Campaign as well as Alec Martin’s diary, and pictures of his journey in Egypt, can be seen in the Irish Linen Centre & Lisburn Museum’s updated exhibition ‘Lisburn, 1912-1914’. Free Entry.