On March 24th 2016 the Irish Linen Centre & Lisburn Museum opened ‘Rising Voices: Lisburn at Easter 1916’, a new exhibition exploring the Easter Rising and Lisburn, through the story of individuals associated with the town.

When the Rising broke out in April 1916 Lisburn,  like many towns in Ulster, was quiet.  There was little public support for this ‘very silly’ rising, particularly as a large number of men from the town – both nationalists and unionist – had joined the war effort and marched off to the front. Yet a number of individuals from Lisburn were caught up in the Rising.  And, from the activities of IRB men Bulmer Hobson, Herbert Moore Pim and Ernest Blythe and the local Irish Volunteers who mobilised at Coalisland, to the local men and women who helped quell the fighting in the capital – active with the RIC or Irish regiments in the British army – this exhibition explores the different voices and experience of the town and its people during the Easter Rebellion 1916.

The Somme in Lisburn

1916 was a significant year for Lisburn and the wider south Antrim, north west Down and Castlereagh area, and Part II of this exhibition – focusing on The Somme and the wider events of 1916 will open on June 28th 2016. 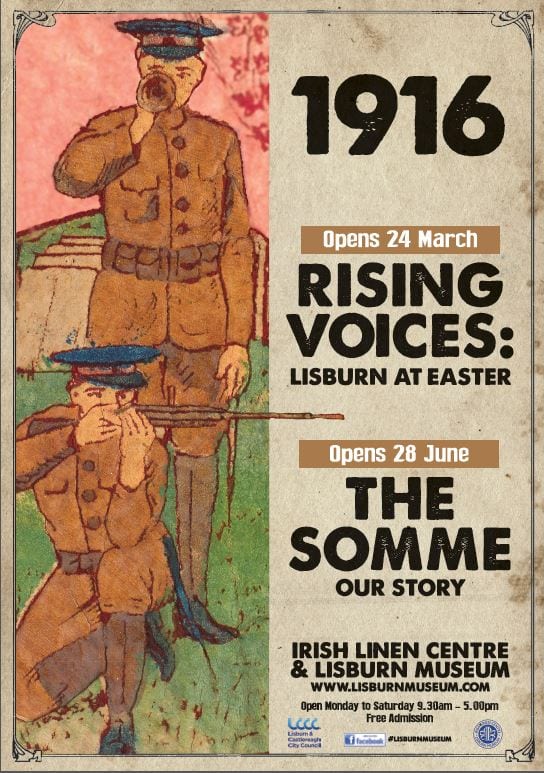