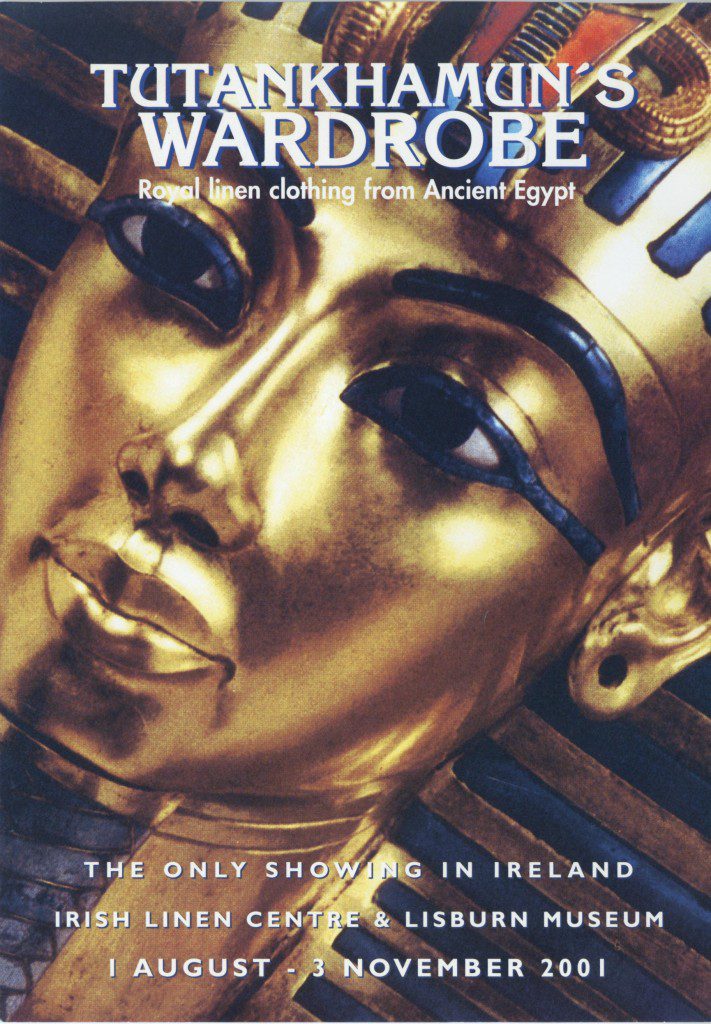 Do you remember our blockbuster exhibition Tutankhamun’s Wardrobe from 2001?  If so, let us know.  Share your thoughts with us on our social media channels, or by email.

The Irish Times covered the exhibition in 2001 and wrote:

His death mask may be instantly recognisable, but a new exhibition in Lisburn’s Irish Linen Centre gets to the bottom of a lesser-known aspect of the boy king Tutankhamun – his very extensive wardrobe.

A vast collection of linen clothing, including at least 145 specially tailored loincloths, was among the priceless treasures discovered in King Tut’s tomb by Egyptologist Howard Carter in 1922.

However, it wasn’t until 70 years later that an English woman, Dr Gillian VogelsangEast wood, carried out extensive re search on the 3,000-year-old collection of tunics, sashes, head dresses, gloves and even socks found at the Valley of the Kings.

That many of the garments had deteriorated so badly and that at the time, textiles were considered women’s work, are suggested as reasons why this part of the tomb’s contents was left unexamined for so long.

However, in 1923 Carter noted that in the future, “the material from this tomb will be of extreme importance to the history of textile art and needs very careful study”. VogelsangEast wood and her team used computer simulation and forensics at the Stichting Textile research centre in the Netherlands to create replicas of the garments found in the tomb.

Thousands have attended the free exhibition since it opened last week. It features replicas of the clothing Tutankhamun would have worn when he became king at the age of 12 right through to the royal and military garb he wore as a teenager, heavily festooned with gold, intricate beading and embroidery. He is thought to have died at 18; many of the clothes in the tomb, such as a pair of gold sandals, were put there for him to wear on his journey to the afterlife.

In the 14th century BC, kings wore the same style of clothing as their subjects, the level of decoration indicating the wearer’s status. Among the most impressive exhibits is his exquisitely decorated high priest robes, complete with gold headband, beaded tunic and leopardskin accessory.

Many of the exhibits feature symbolic motifs such as birds, animals and plants. Vultures, cobras, beetles and sphinxes were embroidered or drawn on to the clothing – one tunic incorporates flying and walking ducks. The garments are exclusively linen, some of it left white, others dyed using lots of red and blue. Any leather in the tomb was destroyed by the moist conditions.

Until the research was undertaken, it was thought that ancient Egyptians did not wear socks, but examples of these were found in the tomb and replicas are on display as part of the exhibition. His wig box, however, was empty. The tomb had been ransacked by robbers before Carter discovered it.

Lisburn’s award-winning Linen Centre, housed in a 17th-century market building, is the temporary home for the international exhibition which will not be shown anywhere else in Ireland during its current international tour. Children can take part in workshops, drawing ancient Egyptian clothing and making death masks. They will receive certificates with their names printed in hieroglyphics.