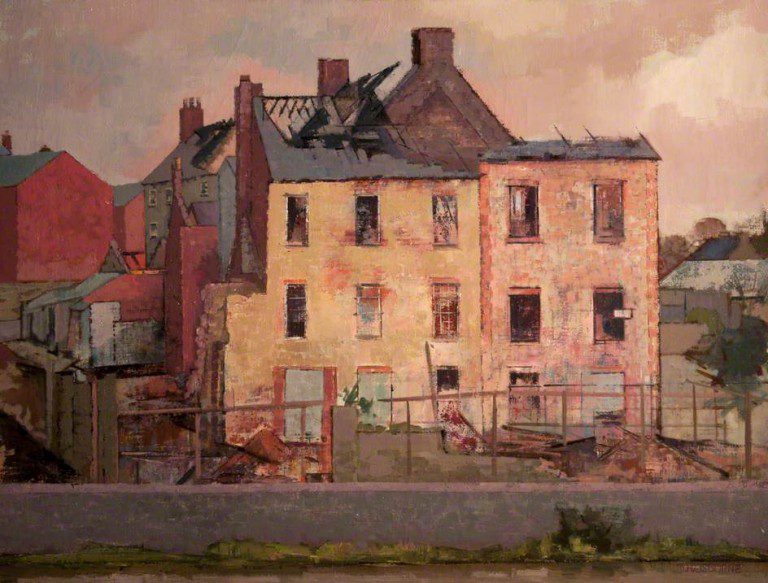 Gifted to the museum in 1991, this oil on canvas by Dennis Osborne features Stannus Place, a gorgeous three-storey Georgian terrace (c.1750) on Hancock Street, opposite the Island Mill.  The terrace was demolished in the 1970s.  Do you remember it?  If so, let us know!

Born in Portsmouth, England, Dennis Henry Osborne served in WWII with the Royal Artillery. He was rescued from Dunkirk in 1940 and later served in North Africa where he was taken prisoner. Having escaped from an Italian POW camp, he spent six months on the run in the Dolomites before recapture and imprisonment in a stalag in Poland. There he spent his free time sketching.

After the War, Osborne pursued his passion for art, studying in London, and exhibiting his work at the prestigious Royal Academy. He married the Larne-born painter Jean Meikle (1926-65) before emigrating to Canada in 1952. His paintings were displayed in a number of exhibitions there and in the United States.

Returning to Northern Ireland in 1959, Osborne worked at Portadown Technical College, before moving to Lisburn in 1964 to take up the post of Head of Art at Lisnagarvey High School. Here he met his second wife Maureen.

Following retirement in 1983, Osborne lived and painted in Newtownards. He died in May 2016.

Dennis Osborne was the subject of an exhibition and book in 2016.