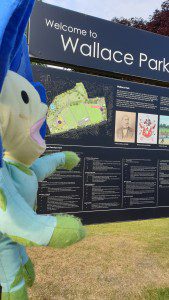 2018 marked the bicentenary of the birth of Sir Richard Wallace (1818-90), the famed art collector and landlord for Lisburn.

Wallace park was originally named The People’s Park, but was renamed Wallace Park in 1890 after Sir Richard’s death.

The duck pond, originally a reservoir, is home to a number of black-headed gulls and mallards.

Flaxie, our under 5s mascot, recently went for an adventure to see what Wallace Park was like and to visit the ducks.

In the Park there were lots of boards with information to read and a handy map to show the layout. 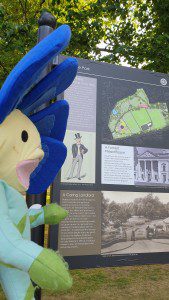 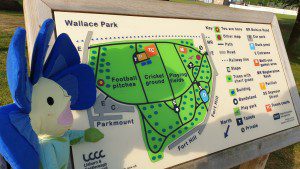 Walking along the beautiful open paths Flaxie saw some well-known sights, a Wallace Fountain and the bandstand.  Flaxie was disappointed that there was no band playing!

Wallace Fountains are world-famous. They are considered works of art and have even been mentioned in films like Fantastic Beasts and Amelie.

From the path, Flaxie was able to spot the spire of Lisburn Cathedral in the distance between the trees. 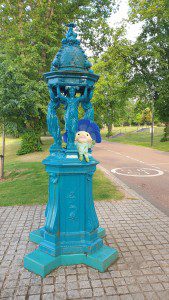 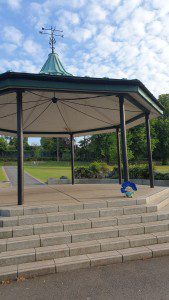 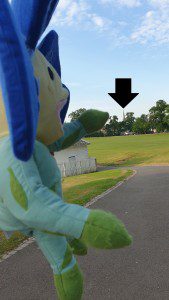 When Flaxie reached the duck pond there was a little family of ducklings splashing in the water.

It looks like there were five ducklings and two bigger ducks…but they swam about so fast it was hard to count them!

Remember, if you go to feed ducks you shouldn’t feed them bread.  It isn’t very good for their tummies.  Take some birdseed along instead so they can have a tasty and healthy treat. 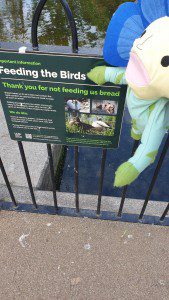 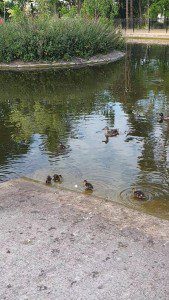 Flaxie thought Wallace Park was really fun, with lots of space to run around, trees to hide behind, history to find and even squirrels to spot!

Watch the Video all about Flaxie’s Wallace Park adventure

After visiting the duck pond in Wallace park Flaxie played with some rubber ducks at home and made a paper plate duck! 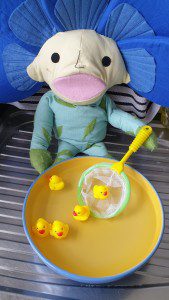 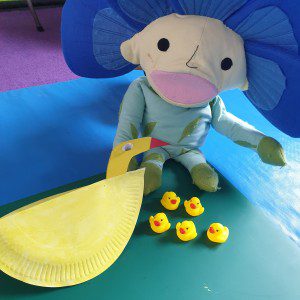 If you would like to make a paper plate duck you can download Lisburn Museum’s FREE Flaxie Buds craft tutorial to learn how.

If you visit Wallace Park let us know!

If you have any memories of the park we would love to hear about them.

You can email us at ilc.reception@lisburncastlereagh.gov.uk

If you send us a photo we can share it with all the Flaxie Buds!