This story has prevsiouly featured here.

With the surrender of the Easter Rising rebels on Friday April 28th 1916, and the re-capture of the GPO, a party of local soldiers, who had helped quell the Rising, returned home. Given a ‘great reception’ at Lisburn Railway Station, the triumphant soldiers showed off their trophy: a flag captured from the rebels at the GPO. But how did the tricolour end up in Lisburn, and what happened to it?

The flag was brought back to the town by the Hillsborough-born Sgt Thomas Davis, a Boer War veteran, and shoemaker from the Largymore Road (now the Hillhall Road). Davis was over 50 years old when the war broke out. In fact, the Lisburn Standard initially reported that due to his age he was at first rejected for service with the 11th battalion Royal Irish Rifles, largely comprised of the local UVF, but luckily ‘discovered’ that he was ‘really younger than he previously thought’, and successfully enlisted in Lurgan.

Davis was attached to the 5th battalion of the Royal Dublin Fusiliers when the rebellion broke out, and was sent into the capital. He appears to have been stationed around Sackville Street (now O’Connell Street). Following the rebels’ surrender, and during the subsequent clean-up operation, Davis is believed to have captured the tricolour. This was one of two flags that flew from the GPO during Easter week. The other, emblazoned with the words ‘Irish Republic’ – was also captured by members of the Royal Irish Regiment, and on the 50th anniversary of the Rising the British Government gifted the flag to the Republic of Ireland. 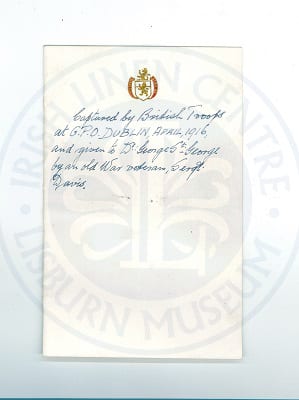 Following his service with the Royal Dublin Fusiliers, Davis was transferred to the 16th Battalion of the Royal Irish Rifles, the Pioneers. In May and June 1916 the battalion was kept busy repairing railway lines and reinforcing trenches, preparing for the Battle of the Somme. Wounded in late June 1916, Davis recuperatd in Lisburn under the care of Dr George St George, at the County Antrim Infirmary. Sometime between this and Dr St George’s death in 1922, Davis gifted the flag to Dr St George. In his own handwriting and on notepaper head with the St George family crest, Dr St George recorded that the flag was: ‘Captured by British troops at the G.P.O. Dublin, April 1916 and given to Dr. George St George by an old war veteran, Sgt Davis’.

Davis remained in Lisburn after the war, and was employed as the gatekeeper at the Island Spinning Mill. Active in a number of local organisations, including the Apprentice Boys and the Orange Order (LOL 195), it was in his role as a prominent member of the Lisburn British Legion that he formed a guard of honour for King George VI when he visited Market Square, Lisburn, in 1937. 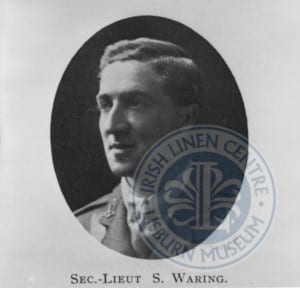 On Dr St George’s death in 1922, the tricolour passed to his daughter, Ethelreda, who was married to Captain Samuel Waring of Lisburn. A well-known amateur jockey, he had served with the 11th Battalion Royal Irish Rifles, the South Antrim Volunteers, winning a Military Cross. Settling in County Meath, the tricolour remained with him until 1951 – the year Ethel died – when it was passed to the descendants of John Sweetman, a prominent nationalist MP, author and founder member of Sinn Fein.