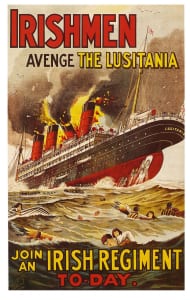 The sinking of the liner in May 1915 was a cause of a huge surge in anti-German sentiment and became a feature of military recruitment campaigns, including this iconic poster.

May 7th 2015 marks the centenary of the sinking of the RMS Lusitania, one of the most shocking civilian atrocities of the Great War (1914-1918). Carrying over 1900 passengers and crew and bound for Liverpool, the Lusitania was torpedoed and sunk by a German U-Boat (submarine) off the coast of Co. Cork, Ireland. Prior to the ships departure from New York in early May the German Embassy had placed adverts in the US press warning that British ships were legitimate targets. As Germany could not directly compete with the might of the British Navy they, instead, planned to ‘cripple’ the Allies by destroying their trade with the neutral United States. Over 1190 passengers drowned. The survivors were taken ashore at Queenstown Harbour (Cobh), Co. Cork, while 150 of the victims were buried in mass graves outside the town.

The sinking of the Lusitania sparked international outrage, yet the Germans defended the attack on the grounds that it was carrying tons of munitions, bound for the Allied war effort.

‘Lisburn Woman among the Slain’ 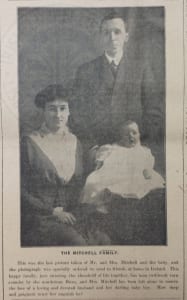 At least three from the Lisburn area were killed in the disaster. As the Lisburn Standard reported, Mrs Margaret Hastings, a widow, had perished, and her body had been quickly buried in a mass grave in Queenstown, along with 65 other coffins. She had been returning to the town after emigrating to New York to provide for her children who lived with relatives on Market Street, Lisburn. The Standard also relayed the ‘sad homecoming’ of Mrs Jeanette Mitchell, Ballylesson. Arriving on a late-night train to Lisburn Station a few days after the incident, she brought home the body of her husband, a former employee at the Island Spinning Co., and a relative of Canon Pounden, Rector of Lisburn Cathedral, for burial in Drumbo. Their young nine-month old son Walter Mitchell Jr was buried in a mass grave at Cobh. Mrs Mitchell’s brother John Moore was also on board, and survived by ‘clutching to the keel of an upturned boat’.

The story of the sinking of the Lusitania as well as other events in 1915, including the Gallipoli campaign, are told in the Irish Linen Centre & Lisburn Museum’s updated exhibition ‘Lisburn, 1912-1914’. Free Entry.

Irish Linen Centre & Lisburn Museum > History of Lisburn > ‘Lisburn’s Lost’: The Sinking of the Lusitania (May 1915)