The November/December issue of History Ireland features an article from our Research Officer Ciaran Toal on local suffragette Lillian Metge and her attempt to blow up Lisburn Cathedral in the fight for women’s suffrage.   The article brings together primary and secondary research and not only examines the events surrounding the August 1914- bombing of the cathedral, but the life and thoughts of this enigmatic agitator.

Here’s brief synopsis of the story, written by our Research Officer Ciaran Toal, and published in the Ulster Star in September 2014.

Mrs Metge and the Bombing of Lisburn Cathedral 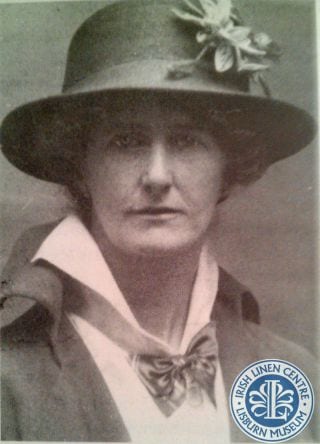 One hundred years ago this month, local suffragettes attempted to blow up Lisburn Cathedral, in what has been described as one of the ‘most daring acts’ of the ‘votes for women’ campaign in Ireland.

On the night of the 31st July 1914 a huge explosion was heard over Lisburn.  Panicked police officers raced to the old gas works on Quay Street, beside the Lagan, thinking it had ‘blown up at last’, but soon the real cause was known.  At the Cathedral Suffragette flyers, masonry and glass were strewn everywhere:  the chancel window of Lisburn Cathedral ­had been heavily damaged.

Almost immediately Mrs Lillian Metge, a founding member of Lisburn Suffrage Society and noted militant, was under suspicion. She, along with three accomplices, were arrested at 8am the next day at Mrs Metge’s Seymour Street home.  As the suspects were escorted from the house to nearby Railway Street Police Station, an angry crowd gathered and hurled missiles, mud and glass bottles, smashing almost all the windows in the house.

One week later the four women appeared on triaI at Lisburn Courthouse.  There was compelling evidence against them.  A local police sergeant reported following, on the morning after the attack, muddy footprints leading away from the cathedral, across Castle Gardens, through the Convent and into the rear of Mrs Metge’s.  On searching her house he recalled finding four damp overcoats and muddy boots hanging out to dry with spent fuse matches in one of the pockets.  Hugh Kirkwood, of Kirkwood’s Hardware Store Lisburn, also recounted a visit from Mrs Metge some months prior to the bombing, when she had tried to buy dynamite to ‘blow up a tree in her garden’.

The four suffragettes refused to take part in the trial.  They continually interrupted the judge, burst into long speeches in support of their campaign, or lunged at the police officers looking after them.   On one occasion it took 13 men and several minutes to control the four women as they stormed the dock. An apple was even thrown at the prosecuting solicitor.

Prospects for the women looked bleak.  Yet dramatically, and just as the last of the evidence had been heard, the four women were released from custody.  In light of the crisis in Europe and the outbreak of war Mrs Metge and her co-conspirators were released by order of the Home Secretary. Across Britain and Ireland the ‘votes for women’ campaign was largely suspended, and many became heavily involved in the war effort.

During the war Mrs Metge continued her campaign for the vote, although through strictly peaceful means.   She eventually left Lisburn, settling in Dublin, where she died in 1954.

The suffragette campaign was ultimately successful, although it has been argued that women’s contribution to the war effort was more persuasive to the government, than the actions of the militants.   In 1918 women over 30 were given the vote, followed by full emancipation in 1928.