The origins of the name Lisburn (Lios na gCearrbhach or Lisnagarvey
[i]
) – what does it mean?

The Ordnance Survey Memoirs provide a clue to the origins of Lisburn’s name. Referring to the area north of present-day Wallace Park, around Fort Hill, and noting that there:

formerly stood a circular fort which was called in the Irish language Lissnakarvagh, and from which Lisburn its original name, Lisnagarvey. Lissnakarvagh signifies the ‘gamblers fort’…adjoining the fort there was an eminent bowling green…[and] the fort itself was also a theatre for various amusements such as card play, dice play.[ii]

Ringforts were enclosed farmsteads, and date from the Early Christian to Early Medieval period, around 500-1000AD.[iii] The enclosing bank is known as the rath, while the internal space is called the lios.

The map, below, dates from the 1840s, and was collated as part of the Griffith’s Valuations, a survey of all privately-held land across Ireland. The rath is clearly shown above the parkland (now Wallace Park). 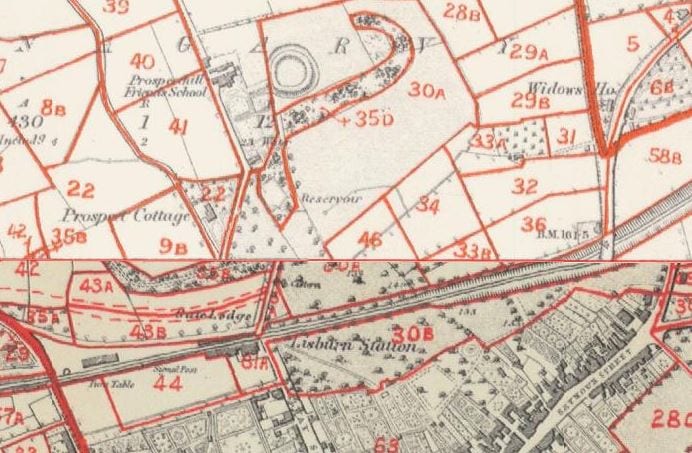 But how do we get Lisburn from Lisnagarvey, especially as it’s not a literal translation, but a derivation of the name, and Lisburn is not used until after the 1660s? The Northern Ireland Place-Name Project provides further insight into the name and its origins, noting that:

The Lis- element in Lisburn may derive from Lisnagarvy, the name of a townland which is incorporated in the modern city centre and whose name goes back to Ir. Lios na gCearrbhach ‘fort of the gamesters or gamblers’. The origin of the element burn in Lisburn is obscure. The oft-quoted suggestion that it refers to the burning of the town in the 1641 Rebellion must be regarded as extremely implausible.[iv]

A further suggestion is that the ‘burn’ from Lisburn references the old gaelic name for a river, burn.